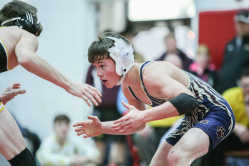 DCS' Brenden Warman squares off with his Mullen opponent in a 113 semifinal match at Saturday's Sutherland Invite.
Gabe Gauthier/McCook Gazette
Order this photo

SUTHERLAND, Neb. -- Maverick Green and Jalen Kruep are no strangers to success.

The Rawlins County, Kan., duo have displayed their athletic prowess on the football field and wrestling mat since their freshman campaigns. In addition to starting and excelling on the the gridiron, both Buffaloes are also two-time Kansas state qualifiers in wrestling.

Now, as seniors, Green and Kruep are looking to cap their high school careers with one final round of hardware.

If Saturday was any indication, they’re both going to do just that.

Green and Kruep won gold at Saturday’s Sutherland Invitational with impressive performances at 170 and 152, respectively.

Green extended his unbeaten record to 12-0 following four victories Saturday. In the championship round, he defeated Bayards Karsen Hunter with a narrow 3-2 decision. Hunter entered that match with a 15-1 record.

At 152, Kruep won first place after picking up a 7-2 decision over previously unbeaten Austin Garcia of Morrill. Kruep’s season record now stands at 9-2.

Those results helped spearhead a Gazette-best sixth-place team finish for Rawlins County, which finished with 103.5 points. The Buffs also picked up points from Cyrus Green at 182 (fourth place) and Will Crouse at 195 (third place).

Close behind Rawlins County was Southwest, which finished seventh with 99 points. The Roughriders had second-place finishes from Kaden Guerrero (132), Cody Downey (182), Anthony Starr (220) and Logan Kircher (285) to highlight their day. Joey Costello won his consolation match at 106 to finish third.

Dundy County-Stratton was, once again, highlighted by Dakota Ehart winning 285. The Tiger senior is now 15-0 on the season after beating Kircher with a fall at the 5:47 mark of Saturday’s championship match. Brenden Warman picked up third at 113, while Wesley Throckmorton was fourth at 160. Asa team, the Tigers finished tied for 10th place with 52 points.

Medicine Valley rounded out Gazette scoring with 20 points and a 17th-place finish. Austin Wolfe took silver at 195 for the Raiders’ best performance.

Winning Saturday’s team title was wrestling powerhouse Amherst, which picked up 146 points. Maxwell was a close second with 132, while Morrill was third with 124.