Bison quickness too much for Wray in Topside Tip-Off 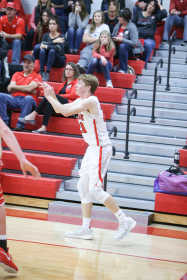 Seth Dugger passes to a teammate during last week’s game against Valentine. Duggar scored a career-high 14 points to lead McCook in a 76-47 win over Wray, Colo., Thursday at the Topside Tip-Off Tournament in Goodland, Kan. The Bison will play Colby, Kan., in a semifinal game today (Friday) at 5 p.m. CST.
Steve Towery/McCook Gazette
Order this photo

GOODLAND, Kan. -- By the time Wray, Colo., got going, it was already too late.

Using a full-court, high-pressure defense and a balanced offense, McCook raced out to a 30-9 lead then cruised to a 76-47 win in Thursday’s first round of the Topside Tip-Off Tournament played at the Max Jones Field House in Goodland, Kan.

The Bison’s up-tempo style had an immediate impact on the game. McCook jumped out to a 21-5 lead in the first quarter, then extended that advantage to 36-15 at intermission. Gabe Sehnert’s buzzer-beater gave the Bison a 21-point advantage at half.

McCook’s best quarter was the third, as the Bison hung 24 points using a similar blueprint to the one they used in the first half.

After being held to 25 points through three quarters, Wray closed the game out with a 22-point performance in the fourth.

Four Bison hit double figures in the win. Junior Seth Dugger had a career-high 14 points to lead all McCook scorers, while Morgan Fawver had 11. Sehnert and Clayton Stevens each scored 10.

Cameryn Berry and James Mockry both scored nine points for the Bison. Huner Potthoff, who scored 25 points against Valentine last Saturday, was held to seven.

With the result, McCook advances to play Colby, Kan., in a championship semifinal. The game will be played at 5 p.m. CST today (Friday) at the Max Jones Field House. The Eagles defeated Wallace County, Kan., 71-57 in the first round.

If McCook beats Colby, it will advance to the Topside Tip-Off championship game, which will be played at 8 p.m. CST at the Max Jones Field House on Saturday night.

If McCook loses today’s semifinal, the Bison will play in the third-place game, which will be at 4 p.m. CST Saturday at the Max Jones Field House.

Up next
McCook plays Colby, Kan., at 5 p.m. CST Friday