Wray pulls away in second half to defeat Lady Bison 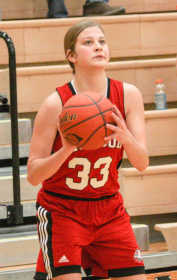 GOODLAND, Kan. -- A fast start and strong finish propelled Wray, Colo., to a 62-45 win over the McCook Lady Bison in Thursday’s first round of the Topside Tip-Off in Goodland, Kan.

With the loss, McCook drops to 1-2 on the season. Wray improves to 2-0, with both wins coming against Nebraska competition.

Similar to last week’s loss at Chase County, McCook found itself in a hole early. Wray started the game on a 17-2 run, with Riley Sis scoring the only field goal during that stretch for the Lady Bison.

McCook would rally to score eight straight points to make it 17-10 after the first quarter.

In the second, the Lady Bison momentum continued. McCook cut the deficit to 20-15 before Wray called a timeout. The Lady Eagles went into the locker room ahead 27-23.

The four-point halftime deficit would be the closest McCook got to Wray the rest of the game.

The Lady Eagles pushed their lead back to double digits at 41-30 midway through the third quarter. An Emily Arp buzzer-beater brought the Lady Bison back to within 43-35, but it would be all Wray the rest of the way.

Wray started the fourth quarter on a 14-2 run to make it 57-37 before playing out the final minutes.

McCook was led by freshman Liviya Wier, who scored nine points. Arp had eight points, while Jaden Bryant, Brantleigh Morgan and Mackenzie Smith each had six.

Wray was led by its post players, Morgan Smith and Maddie Soehner. The 6-foot-1 Smith scored a game-high 21 points, including 11 after halftime. Soehner, a 6-foot-2 senior, added nine.

With the result, McCook drops to the consolation bracket and will play at 3 p.m. CST today (Friday) against Wallace County, Kan., at the Goodland Junior High Gymnasium.

Regardless of today’s outcome, the Lady Bison will finish the Topside Tip-Off with a 12 p.m. CST game on Saturday.