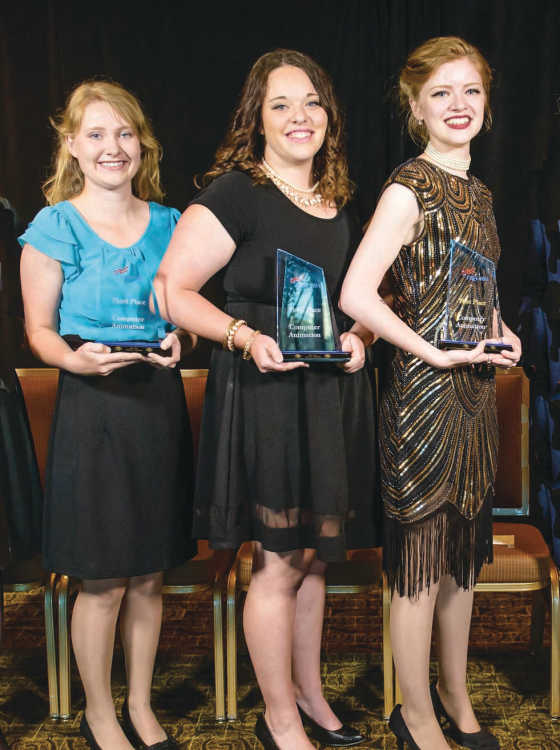 McCOOK, Neb. — After a seven-year run of placing in the top 5 in a national technology and business skills competition, McCook Community College is bringing home a couple of first place awards this year.

Also, Bailey Kool made the finals in the help desk competition. Brad Wessels, Taylor Stettner and Hannah Hanke made the finals in financial analysis and decision making. The group was accompanied to Anaheim by co-advisor Lorrie Mowry.

Since there is no school size distinction in this competition, MCC’s showing comes against competitors from four-year University students as well as other community colleges.

“It was exciting to watch the streaming video, see how excited Emily was when she received first place in computer animation, and then when they did the countdown for desktop publishing after they announced the second place winner and she realized she received first place in that event too, the surprise and delight she raised hands in the air was incredible to watch.”

Karr explained that competitors in desktop publishing create a campaign based on a business and their portfolio includes creating a logo, a poster, a brochure and a newspaper advertisement. These are completed and submitted in advance. In Anaheim this year’s competition involved a test over basic skills, terms, methods, hardware and software,

For the computer animation category competitors were required to create a character that would be the centerpiece for a campaign on business ethics. While this was also produced in advance of the competition, contestants presented the animation to a panel of judges for review and discussion on the techniques and methods used.

“I think competing last year really helped me prepare for the judges panel and know a little better what to expect,” Karr said, who received her Associate of Applied Sciences in Graphic Design and Visual Communications in May of this year.

She is the Assistant Manager at Longnecker Jewelry.