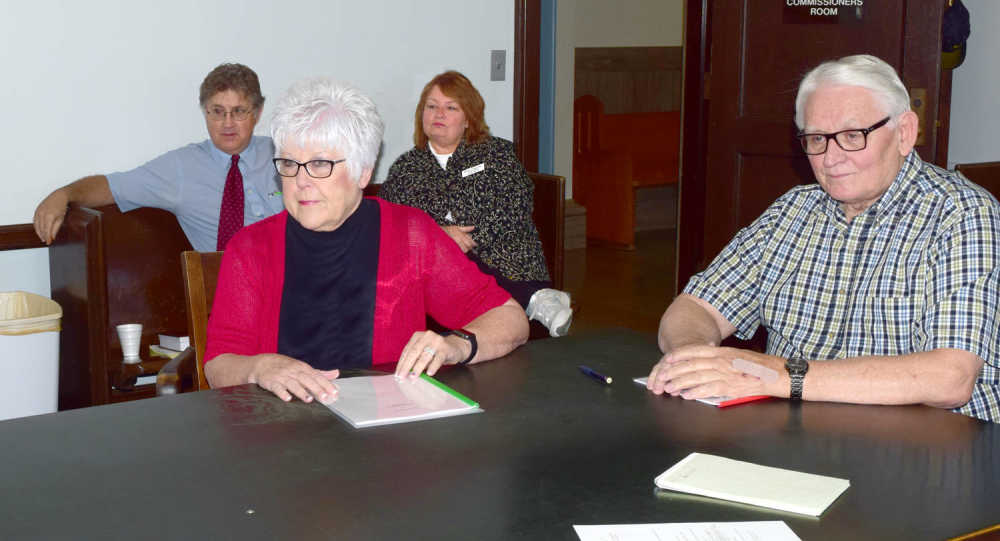 McCOOK, Neb. — A health care management specialist told Red Willow County commissioners Monday morning that the county-owned Hillcrest Nursing Home in McCook “has lots of potential,” and that operating and financial problems “can be corrected.”

Ken Klaasmeyer and his wife, Linda, of Klaasmeyer & Associates of Omaha, presented their assessment of Hillcrest, after being hired to do so by commissioners in May. The Klaasmeyers spent last week at Hillcrest and spoke with officials from McCook Clinic and Community Hospital, McCook.

Commission chairman Earl McNutt said that Hillcrest is a vital part of the community, and that operations need to get back on track after struggling financially for five to six years. Klaasmeyer said that the clinic and hospital agree; he recommends that Hillcrest officials meet monthly with clinic and hospital representatives to improve communications between the three organizations.

At the end of open and closed sessions Monday, commissioners decided they were “not ready” to move into a Phase 2 study by the Klaasmeyers. They will be paid $6,000 for the Phase 1 assessment, McNutt said, and commissioners will review issues at Hillcrest “at a later date.”

Highlights of the Klaasmeyers’ study include:

— The two computer software programs used by Hillcrest “make it nearly impossible to determine what is happening financially for the facility. Because of this, there have been inadequate reports available for the board (of trustees), administration and department directors to monitor the performance of the facility.”

The Klaasmeyers have found a credit to “Expenses” of approximately $770,000 in the “Employee Benefits” account. Klaasmeyer indicates that the auditor believes this was an adjusting error for last year that should have been on a balance sheet, not on the “Profit and Loss” statement. “By having this credit, the expenses were reduced for the facility by the $770,000 for this fiscal year,” Klaasmeyer said.

Klaasmeyer continued that an amount of profit year-to-date of $55,539 “would make it very difficult to meet all cash requirements for the facility.” Medicare and Medicaid pay in the month following service, and, he said, if there is a problem with the billing, it can take even longer. “For this reason,” Klaasmeyer said, “it is very important to collect all private pay revenue and ‘Patient Responsibility’ revenue,” which should be collected by the 15th of the month when service is provided.

Klaasmeyer recommends moving information to one software program as soon as possible, or at least have revenue and non-salary expense on one system. Payroll can then be put on the financial statement using journal entries. He also recommends that the financial separates labor and other expenses by department.

Klaasmeyer says that department directors must be involved in the development of the operating budget, beginning July 1, 2017.

The Klaasmeyers believe that the board of trustees should receive the following reports every month: Profit and Loss, Accounts Receivable Aging, Accounts Payable Aging, a list of all checks written, bank reconciliation and a balance sheet.

Klaasmeyer’s report indicates: “Reviewing the financials that were available cause me concern regarding the revenue for the facility. He elaborated:

Billing higher rates for Medicare Part A (rehab/hospital stay) patients’ services will also generate more income monthly and annually. Medicare rates for people in the facility who are utilizing physical, occupational and speech therapy are based on the number of minutes of therapy they receive each week, ranked on four levels of therapy, “Ultra-High,” “Very High,” “High” and “Medium.”

Klaasmeyer said that revenue at Hillcrest for Medicare Part A is approximately $290 per day, while they would expect that rate to be net revenue of approximately $350 per day.

A survey of nursing facilities in a five-state area show that they are receiving “Ultra-High” and “Very High” 80 percent of the time. Most of Hillcrest’s are “Medium” rates and none at “Ultra-High” or “Very High,” according to a report from the most recent four quarters.

— Although Hillcrest has plans to reduce the number of beds in the “Memory Unit” (Alzheimer’s unit), Klaasmeyer said the Memory Unit is a valuable resource at Hillcrest. “There’s real potential in that,” Ken Klaasmeyer said. On the day of the survey, there were five residents, with a capacity of 19.

— Hillcrest is missing admissions by not allowing them on Saturdays or Sundays, and very seldom on Fridays. The Klaasmeyers feel Hillcrest’s census has the potential to increase by allowing weekend admissions, by changing pharmacy services to make patients’ medications available on a Friday or over the weekend, and by developing a plan for such admissions.

This policy restricting admissions is a “dis-satisfier” with the hospital and physicians, Klaasmeyer said. He admitted that admissions can sometimes take up to six hours, but, he added, “It’s a strain. But you have to do it.”

— Hillcrest’s “Hidden Pines” assisted living unit has competition within the community, and it may be more difficult to increase its census, Klaasmeyer said. The state requires nursing staff for the assisted living unit separate from the nursing home staff, which means that the lower the census, the higher the cost per day.

On the days of the Klaasmeyers’ assessment, there were two private pay residents per day and 5.5 Medicaid-waiver residents. Hidden Pines is licensed for 20 residents with 16 units.

Klaasmeyer recommend determining the positives for the units opportunities to overcome challenges, and developing a marketing plan to see if the census can be improved.

The assisted living rate is low for one person, and high for the second occupant. Having lower rates has not increased census, Klaasmeyer indicates, or the lower rates have not been marketed as a benefit.

* Medicare: Working with the therapy vendor to increase minutes and therefore reimbursement for Medicare Part A residents so that they receive the amount of therapy required for appropriate care. The goal should be to have at least 70-80 percent “Very High” or “High” rates of therapy care. Work with MDS (Medical Diagnosis Scheduling) coordinator to make sure that admissions for Part A are really “medical diagnoses” that qualify for Medicare Part A coverage.

Only 46.5 percent of “Skilled Stays” at Hillcrest are rehabilitation stays. With 53.5 percent of the stays having a medical diagnosis, the facility is in jeopardy of being audited (and required to pay back funds), since this percentage rate is well above the rate of other skilled facilities.

* Medicaid: Evaluate expenses in direct nursing to determine if some of the expenses would be appropriately coded into “Nursing Administration” which is a support service expense, an expense which is under the cap by $14.03. Klaasmeyer said, “If there are expenses that can be shifted, the facility would not lose … $51,600 annually.”

Klaasmeyer said that using two computer software products, as Hillcrest does, makes it “very hard to evaluate the appropriateness of expenses.” Because department directors do not have access to total expenses for their own departments, Klaasmeyer recommends that they and Hillcrest officials discuss dollar amounts for each expense based on past performance and on industry per-patient-day amounts. Klaasmeyer also wants monthly departmental reports that can be shared with directors, and a process by which directors can track expenses.

Linda Klaasmeyer was pleased with the number of surveys returned — 84 of 140 employees. She said that a 30-35 percent return is considered a good return. Employees were asked to answer “Strongly Disagree/Disagree, Neutral or Strongly Agree/Agree.

This is a sampling of employees’ responses:

* Overall, I am extremely satisfied with Hillcrest as a place to work: Strongly disagree/disagree, 35.3 percent; Neutral, 22.1 percent; Strongly agree/agree, 42.6 percent.

* Hillcrest has a competitive salary and benefit package for employees: Strongly disagree/disagree, 44.2 percent; Neutral, 27.9 percent; Strongly agree/agree, 27.9 percent. Klaasmeyer said the high “disagree” percent is attributable to not having health insurance for employees.