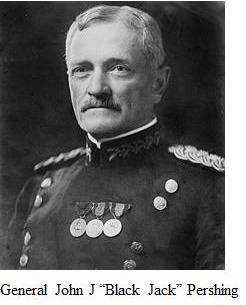 (2017 marks the 100th Anniversary of the American entry into World War I, a war that eventually brought 1.2 million Americans into military service, in France, to aid the Allied Forces in their battle against the Central Powers (mostly Germany). In the coming weeks we will take a look back at that “mostly forgotten” war. Today we take a look at one of the true heroes of WW I, a fellow with ties to Nebraska, General John “Black Jack” Pershing.)

One of the true heroes of World War I was General John J. Pershing. John was born in Missouri in 1860, just prior to the start of the Civil War. His father was a railway section foreman, who believed that his son should have a good education. At 17, just out of school himself, Pershing accepted a teaching position in a local Negro school. Though the wages were low he managed to save enough to enter the Teacher-Training school at Kirksville, MO.

John planned to become a lawyer, but when he saw a newspaper announcement about a US Military Academy examination he decided to take the test, as a way to receive a free college education. He passed and was appointed to the Military Academy at West Point. He was only average in scholarship and graduated in 1886 at the middle of his class. But his attention to detail and his soldierly qualities at the Academy were outstanding and he graduated as Senior Cadet Captain, the highest honor a cadet can achieve at West Point. 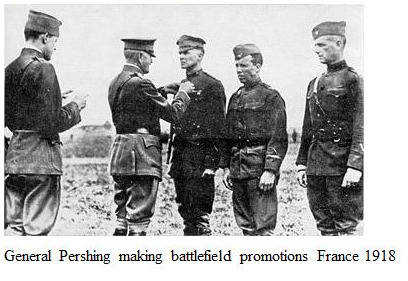 As a new 2nd Lieutenant he was assigned to the Southwest in the closing campaign against Chief Geronimo and his Apaches. His daring and quick action earned a commendation from Gen. Miles. Later he led a command of Sioux Scouts into the Dakotas to put down an Indian outbreak at the Battle of Wounded Knee.

From 1891-95 Pershing was an instructor of Military Tactics at the University of Nebraska, where he earned a reputation for his strict discipline, if not one for being a popular professor. He apparently still thought that law would be his profession, and while at NU he earned his law degree, though he never did practice law. Pershing is still remembered in Lincoln. When I was at UNL his picture was prominent in the ROTC classrooms. The elite rifle Company is called The Pershing Rifles, and the downtown Pershing Auditorium honors him.

From Lincoln Pershing returned to West Point as an instructor of Military Tactics. Here his name elicited fear and loathing, not admiration. He earned the nickname of “Lord God Almighty”. As an upperclassman he had been an ardent participant in the hazing of cadets. When he returned to West Point in 1897 as the officer in charge of cadet discipline, he took “a perfectly ordinary group of cadets and made them hate him”. Later, with a different role in the Army, his iron will and forceful personality propelled him to the highest rank in the US Army, and he became America’s #1 Hero in World War I.

In the Spanish American War he acquired the title of “Black Jack” Pershing, when he commanded a Cavalry Regiment of Negro soldiers. (Note: Originally, he was called “N — -- Jack”, a mark of derision by fellow officers. Later, it was changed to “Black Jack”, and became a mark of honor for Pershing.) He and his command distinguished themselves in the battle of San Juan Hill. Pershing’s conduct was noted by his colonel, who said, “I have been in many fights through the Civil War, but Capt. Pershing is the coolest man under fire I ever saw in my life.”

In 1899 Pershing went with his army unit to the Philippines to put down a rebellion of 100,000 Moros — proud, warlike Muslims, who were split up into dozens of bands and had repeatedly defied “all” outside interference, from their supposedly impregnable jungle retreats. The Spanish had not been able to subjugate the Moros in 300 years of Spanish occupation of the Philippines, and the Moros started a campaign against the Americans as soon as the US Army freed them from Spain.

After a series of terrorist attacks on American units, Pershing, just a Captain, was sent in to subdue the Moros. Using knowledge of the Muslim religion, plus an iron resolve, and a willingness to be ruthless, he sent out orders to catch a few of the terrorists and teach them a lesson. His prisoners were forced to dig their own graves. Then they were tied to posts, execution style. The US soldiers brought in pigs, slaughtered them. They rubbed their bullets in the hogs’ blood. The aversion to pork among the Muslims was so great that this meant that the Moros, so executed, could not enter Heaven, even though they died as martyrs.

All but one of the terrorists were shot, their bodies dumped into their graves and the slaughtered hogs were dumped atop the bodies. The lone survivor was allowed to escape back to the terrorist camp to tell his brothers what had happened. This brought a stop to terrorism in the Philippines, which lasted for the next 50 years.

In 1906 Pres. Theodore Roosevelt promoted Capt. Pershing to Brigadier General, over the heads of 862 majors, lieutenant colonels and colonels who were Pershing’s seniors. Though this sent storm waves through the army Roosevelt stood his ground and the promotion stood.

Over the next years Pershing was assigned to various posts, both stateside and abroad, including an expedition against the Mexican Patriot/Bandit, Poncho Villa. Each assignment earned him the highest commendations from his superiors.

In 1915, while Pershing was in Mexico, his wife and three daughters — all his family except his son, Warren, were killed when a fire swept through their quarters at the Presidio (San Francisco). Pershing left his duties just long enough to see to the burial of his family and to leave his son with his sister in Lincoln, NE. He didn’t talk much about the tragedy, but when he returned to his post his hair had turned white and his face was deeply lined.

When it became apparent that the U S would be drawn into the World War, President Wilson promoted Pershing to Major General (over five senior Brigadiers). He further infuriated the army when he appointed Pershing to be Commander of the American Expeditionary Force (AEF) in France, even though he was junior on the list of eligible Major Generals.

When the American troops landed in France, Pershing laid a wreath on the tomb of the Marquis de Lafayette, saying, “Lafayette, we are here”, symbolizing repayment for the aid that Lafayette and the French had given Americans during our Revolutionary War with England.

As head of the AEF, Pershing was faced with two tasks. 1. He had to assemble a staff and an Army that would eventually number 2 ˝ million men; He had to arm them, and train them to fight a war in an incredibly short time. 2. He had to keep his army together, as the “American Army.” The British and the French wanted to use American soldiers as replacements in their own respective armies, ceding control to the French and British commanders.

Pershing was willing to work with the European Commanders, but steadfastly refused to let his army be gobbled up piecemeal. This led to a number of heated discussions with French and British officials. French President Clemenceau called Pershing “a man of unswerving purpose — the stubbornest man I ever met.”

Pershing’s Army was trained to move fast, in open offensive warfare. This contrasted with the French and British whose emphasis was on trench (defensive) warfare, which in 3 years had brought the war to a stalemate. When operations went badly for the Allies in late summer 1918, French Generalissimo Foch agreed that the Americans should have their separate army. Subsequently, the Americans were the deciding factor in the battles of St. Mihiel and Argonne, bringing the War to a close with the Armistice in November.

After WW I, Capt. Liddell Hart, British critic who had dealt harshly with most of the Allied military leaders, wrote, “It is sufficient to say that there was probably no other man than Pershing who would or could have built the structure of the American Army on the scale he planned. Without that Army the war could not have been saved and could not have been won”.

Pershing is buried in Arlington Cemetery near his beloved doughboys of WW I. In the years after “his war”, until his death in 1948 Pershing was treated throughout the world as almost a Super Hero — A Soldier’s Soldier — “The Man Who Saved The World For Democracy”.