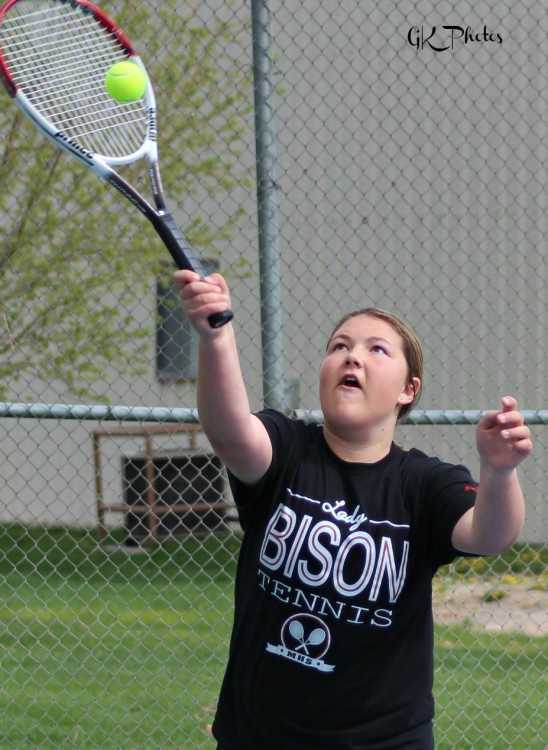 McCook’s Kirsten Collicott and the Bison tennis teams have been hitting plenty of winning shots throughout this 2017 season. Unfortunately, anticipated wet and cold weather has caused a postponement of Saturday’s McCook Tennis Tournament until May 11.
Gayl Korus

McCOOK, Neb. — The first weekend of May has turned into a nice light schedule for most area spring sports teams.

Friday’s expected rain and chilly temperatures followed perhaps some snow flurries on Saturday have forced several events to be postponed or cancelled.

The SWC was actually moved to Wednesday at Gothenburg, but Bison officials decided they would not compete. They have another league meet set with the Greater Nebraska Activities Conference at Scottsbluff set for next Thursday.

The Holdrege Invitational has been rescheduled for Monday.

McCook’s excellent girls tennis team — undefeated in duals this season — was scheduled to host a tournament on Saturday. The anticipated nasty weather has moved this tourney to Thursday, May 11 at McCook’s home courts.

However, as of this morning, a Bison home dual against Alliance on Friday is still set to be played at 2 p.m. Another dual against the Scottsbluff Bearcats has been cancelled.

One other Friday event not postponed is the RPAC track and field championship meet at Trenton.

Hitchcock County activities director John Kershaw confirmed this morning that no changes have been made. There are 14 schools competing in the RPAC including Hitchcock County, Cambridge, Southwest, Dundy County-Stratton, Wauneta-Palisade, Arapahoe, Southern Valley, Medicine Valley and Maywood-Hayes Center.

Watch for any other changes on mccookgazette.com.

The Bison golf team was not scheduled to compete again until Monday’s Ogallala Quadrangular.