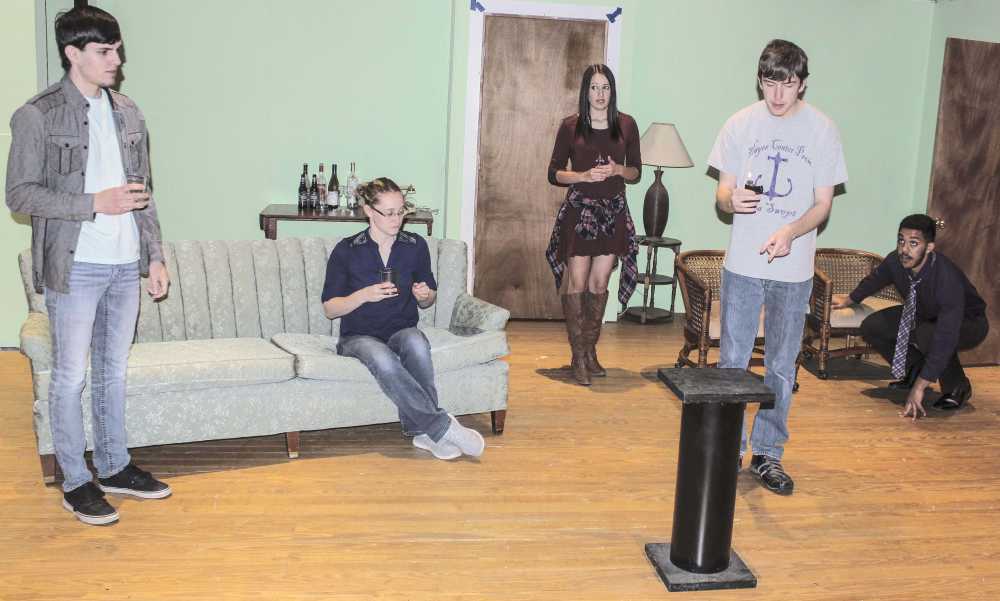 Comedy is lurking in the shadows and thrust into intermittent light when the McCook Community College theater department presents “Black Comedy” this week at the Weeth Theater on campus. Performances are set for 7 p.m. each night with a 2 p.m. Sunday matinee. Cast members — pictured here looking for some “missing” artwork — include (from left): Brandon Molcyk, Sarah Jones, Allison Priddy, Joe Anderjaska and Hunter Layton.
MCC Photo

Performances – under the direction of MCC Theater Instructor Clay Grizzle -- are set for 7 p.m. Thursday, Friday and Saturday with a 2 p.m. Sunday matinee April 23.

The play centers around Brindsley Miller, who has “embellished” his apartment with furniture and objects d’arte “borrowed” from the absent antique collector next door hoping to impress his fiancee’s pompous father and a wealthy art dealer.

When the fussy neighbor returns, a blown fuse plunges the apartment into darkness resulting in unexpected guests, aging spinsters, errant phone cords and other snares which impede his frantic attempts to return the purloined items before light is restored.

Here is the MCC cast and sketches of the characters they are portraying:

Hunter Layton as “Brindsley Miller” a young sculptor, mid-twenties, intelligent and attractive, but nervous and uncertain of himself.

Sarah Jones as “Miss Furnival” a prissy and refined middle-aged lady, clad in the blouse and sack shirt of her gentility, her hair in a bun, her voice in a bun, she reveals only the repressed gestures of the middle-class spinster -- until alcohol undoes her.

Joseph Anderjaska as “Colonel Melkett” who is Carol’s commanding father. Brisk, barky, yet given to sudden vocal calms which suggest a deep alarming instability. It is not only the constant darkness which gives him his look of wide-eyed submission.

Brandon Molcyk as “Harold Gorringe” the bachelor owner of an antique china shop, and Brindsley’s older neighbor. A specialist in emotional blackmail, he can become hysterical when slighted, or (as inevitably happens) rejected.

Harley Scott as “Schuppanzigh” a German refugee, cultivated, effervescent and delighted to be in England, even if it means being employed full time by the London Electricity Board.

Brice Addissono as “Clea” who is Brindsley’s dazzling, emotional, bright, mischievous ex-mistress who delights in creating a dramatic situation out of the darkness.