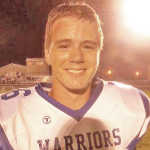 Lane was born Aug. 22, 1996, at Jackson, Wyo., the son of Michael C. and Ralyn M. (Barker) Barber. Lane received his primary education at Jackson Elementary School, until the family relocated and he completed his high school education at Southern Valley High School in Furnas County, Neb. During his high school career, he enjoyed participating in track, weight lifting and especially football.

Following his education, Lane was employed in Cheyenne, Wyo., until relocating back to Stamford, where he was employed by Maschhoffs in Furnas County. His work ethic spoke for itself, Lane was reliable, and his employers could always depend on him to do the job right. Even at the age of 15, he could be found putting in a full day of work beyond his years.

When Lane walked in a room of people, his personality would light the space quickly. Even during his high school years, Lane could often be found riding the bus so he could help the bus driver with the activity of the small children en route to school.

Lane loved to hunt and fish, and being outdoors was when he was in his element. No matter what Lane put his mind to, he put his heart and soul into it! His love for his family and friends will never diminish.

He leaves to celebrate his life his father, Michael Barber of Stamford; his mother, Ralyn Barker of Cheyenne; sister, Terryn Barker of Sutherland, Neb.; paternal grandmother, Helen Hackney and her husband, Keith of McCook, Neb.; great-grandfather, Reid Jackson of Jackson, Wyo.; and a host of aunts, uncles, cousins, other relatives and friends.

There will be no visitation, the family is honoring Lane’s wish for cremation.

In lieu of flowers, a memorial has been established in Lane’s honor to help those in need of assistance.

Celebration of Life Service for Lane will be Saturday, April 22, 2017, at the First Congregational Church at 10:30 a.m. with Pastor Steve Bales officiating. Inurnment will be in the Cedar Bluff Cemetery at 1:30 p.m.

Friends may send condolences online at www.carpenterbreland.com. Carpenter Breland Funeral Home is in charge of the arrangements.