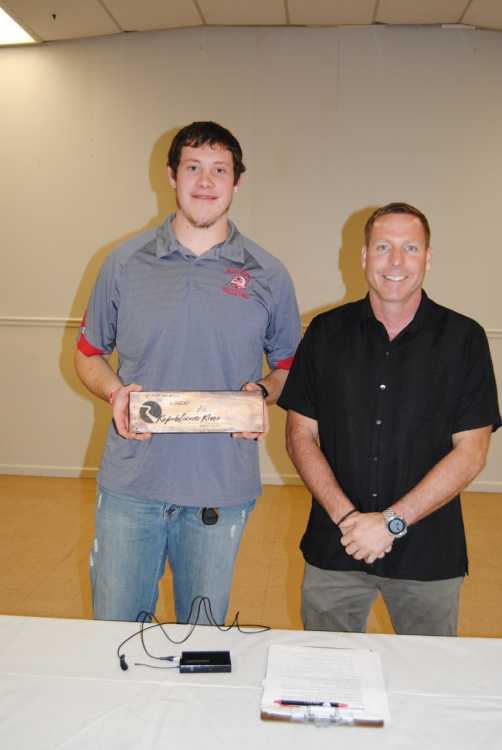 The 2016 Republican River Fitness Series officially came to a close Saturday night with the first award banquet. Nearly 100 participants and their guests celebrated the fruits of their year-long efforts with a dinner and awards at the KC Hall in McCook for age-division winners and series finishers.

The Republican River Fitness Series is a cooperative effort between Community Hospital and the YMCA to promote a healthy and active lifestyle in our community. The fitness series is also supported by McCook National Bank, Brown's Shoe Fit and Acme Printing.

Overall age-division winners for the 2016 Republican River Fitness Series were (women/men): 19 and under, Riley Rambali and Grant Wells; 20-29, Sarah Schilling and Zach Baker; 30-39, Staci Blomstedt and Mike Farr; 40-49, Travi Rambali and Troy Swartz; 50-59, Martha Roe and Kenneth Tenbensel; and 60 and over, Sharon Bieber and Jim Olson. Awards were presented to the top 5 in each age division for both men and women.

The evening wrapped up with the presentation of the first Michelle Walter's Memorial Award, which was awarded to Zach Baker.

Michelle Walters was an active participant in the fitness series before her death in August 2016 at the Boulder Ironman Triathlon. The award was given to Zach, who best exemplified Michelle's motto, "If not now, when?"

During 2016, Zach completed his first half-marathon at the Community Hospital Super Hero Run in August. He added a second half-marathon in North Platte the next month. Since his first 5K -- the Shamrock Shuffle in McCook last year -- to his latest 5K - the Reindeer Run at Barnett Park in December - Zach has dropped 10 minutes from his personal best time. And that's not all that he has dropped. He was diagnosed with sleep apnea several years ago, which prompted a change in his lifestyle and he has since dropped more than 150 pounds.

"To honor Michelle's spirit, we wanted to select someone who has shown a desire to improve themselves through fitness," said RRFS director Ronda Graff. "The person also needs to encourage others to become more active and show a positive and supportive attitude toward others who may be new to running and walking these events."

Graff added, "We weren't looking for the fastest or fittest, but rather than person who is a role model for others to get moving or keep moving and Zach Baker is a tremendous example to all those involved in the fitness community."

And he's not stopping now. Zach is in the middle of training for his newest and longest distance -- the Lincoln Marathon on May 7.

During the 11 events in the 2016 fitness series, hundreds of individuals participated, totaling more than 1,000 entries. The runners and walkers came from all over Southwest Nebraska and Northwest Kansas, as well as Lincoln, Omaha and North Platte. For some, they participated in their first 5K during 2016. Others took on the challenge of a half-marathon for the first time. And some improved their personal records -- or PR -- between the Shamrock Shuffle last March to the Reindeer Run in December.

By simply participating in any fitness series event, runner and walkers were part of the fitness series and were eligible for year-end prizes. They earned points for both participating in an event as well as placing in the top 5 within their age division. Those points can be tracked on-line throughout the season and many Republican River Fitness Series participants knew how close their nearest competitor was in the rankings.

While the 2016 Republican River Fitness Series is in the books, the 2017 fitness series is off and running with a full-slate of events beginning with the fourth annual Shamrock Shuffle on March 25.

The 2017 calendar also includes the addition of the Michelle Walter's Memorial Triathlon in June and the McCook High School Cross Country Team's Zombie Run in October. In addition to information about the series, the full event calendar is available at the www.republicanriverfitnessseries.com, with links from the McCook YMCA and Community Hospital websites.