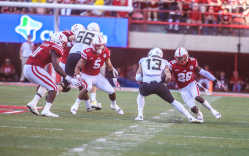 A host of Husker defenders close in on Oregon's Devon Allen (13) during Saturday's game. Photo by Steve Towery/McCook Gazette.

For the first time in program history, Nebraska embarks on a nine-game conference football season when the No. 20 Huskers (3-0, 0-0 Big Ten Conference) play Saturday at Northwestern (1-2, 0-0).

New for Nebraska, not new for Mike Riley.

The second-year Husker coach is familiar with nine-game conference schedules, having maneuvered them in his 14 seasons as coach at Oregon State.

"Before it became the Pac-12, I thought it was perfect," Riley said Monday at his weekly news conference. "There were 10 teams and you played all of the teams every year. It was very, very even.

"The way the conferences are now it isn't going to happen again."

Of the Power 5 conference, only the Big 12, with 10 teams and no divisions, plays a true round-robin format.

Even when the Pac-10 became the Pac-12 and created two six-team divisions, it stuck with a nine-game conference format.

Now the Big Ten, in its third season of 14 teams and two seven-team divisions, is switching to a nine-game conference schedule, and Riley favors the change.

"I like it this way," he said. "I know you have to play everybody in your division, and since our conference is so big, I think having those other league games that aren't in your division are good games for everybody to play in and to watch.

"I think it's probably appropriate that we play nine. If that is the case, then every league should probably do that. Who's missing that right now?"

Despite 14 teams, it's still working with an eight-game conference schedule. Several SEC teams fill one of their four nonconference games with an FCS opponent -- a practice the Big Ten will begin to avoid.

"I think with the (College Football) Playoffs at stake and things like that," Riley said, "that (conference schedules) should be equitable."

Riley began his news conference by saying there'd be no more Oregon talk after Monday.

Much of his 35-minute segment centered on Nebraska's inspiring 35-32 victory over the Ducks on Saturday, and how Riley would prepare his team to regain focus against a Northwestern team that's off to a sluggish start but is always dangerous.

"I think this could be one of your hardest coaching jobs, actually," Riley said.

Nebraska is 3-2 against Northwestern since joining the Big Ten, and four of the games have been decided by three points or fewer. The Wildcats have won two of three games in Lincoln, while the Huskers have won both games at Ryan Field, where a heavy Husker contingent is expected for the 6:30 p.m. game (BTN).

Northwestern won its first game of the season on Saturday, defeating Duke after opening with losses to Western Michigan and FCS team Illinois State. The Wildcats have allowed only 14.7 points in those games.

"We know what we're going to get," Riley said. "This team had a rough start, came back with a good win against Duke. Pat (Fitzgerald) does a great job of coaching this team. They are always tough-minded, have won a lot of games. We are looking for a team that is on the rise, I think."

In fact, Riley recalled coaching against Fitzgerald the player when Northwestern played USC in the 1996 Rose Bowl. Fitzgerald was a linebacker for the Wildcats, and Riley was offensive coordinator for USC, which won 41-32.

"That defense back then is very similar to how they play now. They are sound," Riley said. "You couldn't find big plays on them. They don't let the game get away from them. They're well-coached and they've got some good players."

Tommy Armstrong Jr. said he was "just now getting over" his sore legs that hindered him Saturday, when the senior quarterback experienced leg cramps in the second half of a warm day.

And yes, he drinks pickle juice, a common practice to prevent and cure cramps.

"I drink it almost every day at practice," Armstrong said. "I've gotten used to it now. It's not too bad."

Combine that with ice baths and drinking plenty of fluids throughout the week, Armstrong said he should be fine.

Otherwise, Riley said Nebraska emerged from the Oregon game without injury issues. Tight end Cethan Carter had the wind knocked out of him on the Huskers' final drive but is fine.

The biggest lingering question mark entering the Northwestern game is the status of senior receiver Brandon Reilly, who missed the Oregon game with a hamstring issue.

"He's made progress for sure. He's run a little bit," Riley said. "We'll see where he is for tomorrow. I sure hope he can play."