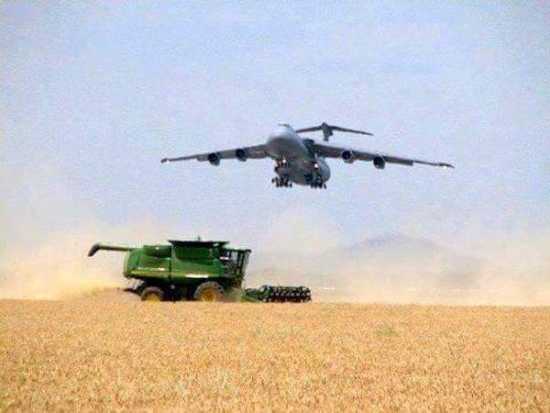 Is this a great country or what? If one wants to see how the seasons progress it is interesting to simply drive south across Kansas and Oklahoma. Three hundred miles south and the maturity of the crops about the equivalent to a month in time. When we left home last week a discerning eye showed just a touch of gold to the green waving wheat. Taller and better looking with big long heads it promises to be a better crop than we've seen in years. The farther south that we traveled the more golden did the fields appear. By mid-Oklahoma the crop looked almost ready to meet the combine. Finally this old farm kid, I cut my teeth in wheat harvest first running a combine in 1953, could no longer resist. I stopped the car and waded out into the hip high crop, plucking heads and shelling out the berries in my hand. It looked better from a distance and my small sample showed earlier drought, some shriveled berries but most yet plump and of course too high moisture to harvest but maybe 20 to 25 bushels per acre my guesstimate. And yes chewing a mouthful still made country kid wheat gum.

Having lived in Western Oklahoma, Enid, Oklahoma City, and Burns Flat, courtesy of the US Air Force we kind of understand the nature of the place. Flat, dry, a large percentage farmed and the rest pasture it is a lot like home. The dirt may be red but they raise wheat, corn and milo--down there it is called "maize" and clear south along the Texas border a little bit of cotton. Eastern Oklahoma is a whole 'nother flavor. There the terrain is rugged with a lot of trees covering the up and down. The small percentage is farmed acres and those small fields are mostly unirrigated as evidenced by a lack of center pivots. A few straight roads, the interstates and toll roads exist but most are twisty and curvy.

To give you a bit of flavor of the place while I was stationed at Tinker AFB, Oklahoma City one of our F-105s developed engine trouble near the Arkansas border. The pilot ejected and his parachute brought him to the ground as advertised. The search and rescue people were mighty concerned for the pilot's safety, and probably their own, because the area where he ejected was definitely in the hills where the natives did not welcome government people, "revenuers" they called them. Something about the taxes they refused to pay on the liquid cash crop that was produced from stills back in the rugged hills. Moonshine. Ah, yes, it all turned out alright the pilot was rescued in good time and nobody was hurt or busted. Interesting country.

Our destination was the airport at Tahlequah where I had purchased for Grannie Annie the very best of anniversary presents. (57 years as of today) It is an A-65 an airplane engine manufactured by Continental in 1946. The engine on my Aeronca Champ, same vintage, had developed major problems and needed replaced. Perfect present! Great trip for Grannie as she also got to eat her fill of catfish, fried okra and hushpuppies. Now between you and me I am wondering what it will really cost me in the end. On return to the engine rode fine in the back end of our SUV and at every stop Grannie proudly invited people to see her wonderful gift.

Summer time back home. Warm and no wind. Growing season we called it. Then comes harvest, wheat harvest that is. The picture above was taken just off the end of the north/south runway at Altus AFB, Oklahoma. It is a C-5 on short approach about to land on the runway behind the photographer. I am reminded of the young pilots that I taught to fly right here at McCook Airport, Trevor Evans in particular who made many a landing at Altus learning to fly the C-17 a little smaller, still BIG, than the C-5 pictured. Trevor also used to run the John Deere combine for his uncle Jon and grandad Larry before heading off to the service. How many young people in this world have done both? The picture forwarded via Facebook by Trevor's proud mom Christy.

Yes dreams do come true. The picture reminded me of ye old writer driving a 1940s vintage Massy Harris self-propelled combine for Kenny Spencer the summer of 1954. Big 14 foot header, minuscule in today's world, when Kenny farmed one half the old McCook Army Air Base. I pulled out on the end of runway 27 and paused as if lined up for takeoff.

Vividly I dreamed of doing that very same in a large multi-engine airplane someday. Back to wheat cutting. Then many times since while flying the KC-97 and later the KC-135 as I would line up on the runway and push four throttles up to takeoff power that very dream has visually flashed back through my mind. Sometimes dreams do come true.

More from this columnist · Dick Trail
Comments
View 3 comments
Note: The nature of the Internet makes it impractical for our staff to review every comment. Please note that those who post comments on this website may do so using a screen name, which may or may not reflect a website user's actual name. Readers should be careful not to assign comments to real people who may have names similar to screen names. Refrain from obscenity in your comments, and to keep discussions civil, don't say anything in a way your grandmother would be ashamed to read.
Respond to this story