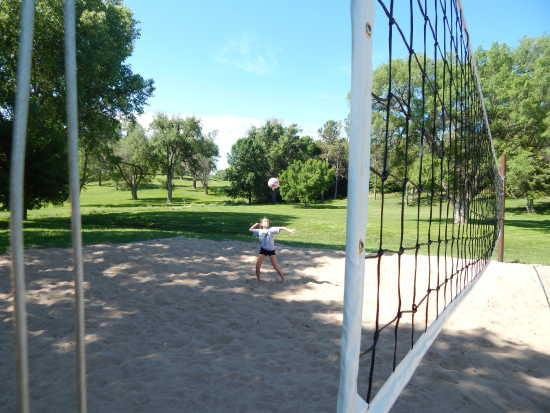 9-year-old Aubrey Broz of Hayes Center winds up a serve to her mother, Britni, earlier this morning at Kelley Park. A McCook Eagle Scout is leading a fundraising effort to improve the Kelley Park volleyball court and bring it up to professional sand volleyball standards. (Bruce Baker/McCook Gazette)
Order this photo

Petty said his intent is to bring the court up to professional sand volleyball standards and hopes to do so with donated materials and fundraising efforts. The project includes raking, cleaning and refilling sand in the outdoor court, in addition to installing railroad ties to barricade the sand in. It would also extend the playing boundaries and mark them off with a rope and includes replacing the net, repainting poles and installing a snow fence to help keep the ball out of nearby Kelley Creek.

Petty plans to remove the wooden posts surrounding the court and install a railroad tie barricade to contain sand. His plans would extend the court by three feet on the east and west side and five feet on the north and south side, bringing it close to a nearby tree. 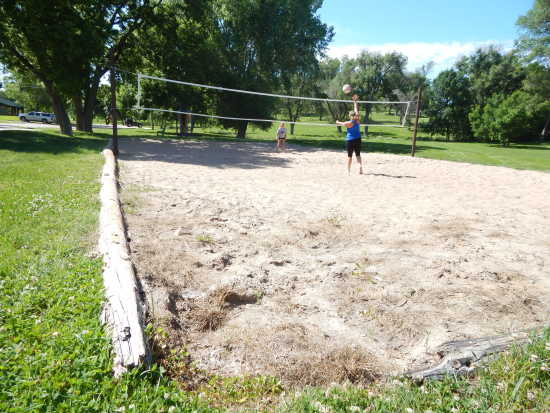 "There is a tree on the east side that is near where our boundaries will be but it won't bother anything," he said during his presentation to City Council.

Councilwoman Janet Hepp asked if the railroad tie barricade would present more of a hazard than the wooden poles currently in place. Petty indicated the railroad ties would be installed low enough to avoid being a hazard, yet still contain the sand court.

McCook resident Dale Dueland indicated he was concerned a recently installed metal bench may present more of a safety hazard than the proposed railroad tie barricade, prompting Public Works Director Kyle Potthoff to say he would look into it. Potthoff said safety of volleyball players was taken into consideration when the bench was installed but indicated he would take another look at it given the proposed court expansion.

Councilman Gene Weedin asked about the estimated cost of the project, Councilman Jerry Calvin asked for contact information for individuals looking to donate time or money and Mayor Mike Gonzales inquired when the projected might be completed.

Petty estimated the cost of the project to be $1,800 before material donations and said he hoped to begin work on the project as soon as City Council and Scout Board approval was received. He said the actual labor involved could be completed in one day and estimated a little more than a week would be needed to solicit donations.

City Council subsequently approved Petty's plan with Councilman Calvin motioning to; "Give our total blessings to Mr. Petty on his Eagle Scout project at Kelley Park."

* Rob and Barbara Pinkal received second reading approval to construct a house and garage on property at 305 East 12th Street, specifically lots 7-12 of block 8 in the Brown's Park Addition. The project required approval to modify the zoning designation from Business Commercial to Residential Medium Density District. City Council indicated the item would be brought back for third and final reading approval at the next meeting.

* The annual contract between the Heritage Senior Center and the West Central Area Agency on Aging, pertaining to senior center operations, was approved for renewal.

* Mo Dough LLC was granted a special liquor license for a reception at the Peter & Dolores Graff Events Center on Nov. 10, 2016, and another at the Armed Forces Reserve Center on Oct. 1, 2016.

* Hi-Times Liquor Mart was granted a special liquor license for a dance/reception at Memorial Auditorium on July 8-9.

* Schmick's Market was granted a special liquor license for a dance/reception at Memorial Auditorium on Aug. 27 and at the Red Willow County Fairgrounds Community Building on July 2.