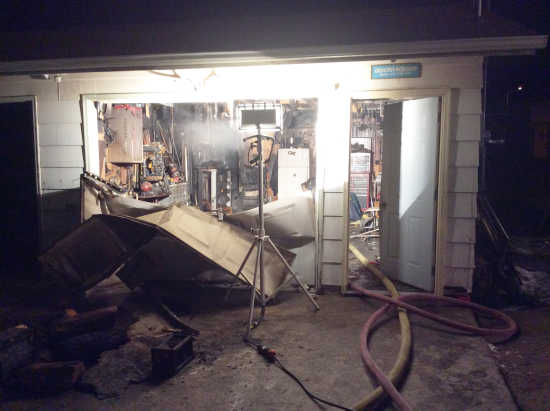 Damage to a garage on East B in McCook is suspected to have been started by a wood stove Wednesday evening. (Courtesy photo)

McCOOK, Neb. -- A wood burning stove is suspected of causing a garage fire Wednesday evening which resulted in an estimated $35,000 in property damage.

The City of McCook Fire Department was on the scene within two minutes after receiving a report of a fire behind the house at 1006 East B Street at just past 4 p.m. in the afternoon. A three stall garage at the residence had smoke exiting the back side and coming from the eaves, according to the fire department.

Firefighters quickly extinguished the fire before it caused any structural damage to the property, which is owned by Kenneth Yeager.

The fire caused moderate damage to the contents of the garage and to some of the wall and ceiling finishes, according to the fire department. A subsequent investigation revealed the wood burning stove located in the garage had been left unattended and ignited a nearby stack of wood. Initial damage estimates were set at $35,000.

Damage to the garage would have been much worse, were it not found as soon as it was, according to Fire Chief Marc Harpham.

"Fortunately, we had observant citizens that seen smoke coming from the garage and called 911 right away, probably saving the garage from burning," said Chief Harpham. He also credited the quick response of fire personnel in assisting with keeping the fire from doing further damage.

A total of sixteen firefighters responded with two pumpers, one ladder truck, one ambulance, and one command vehicle. Harpham estimated firefighters were on the scene for approximately two hours completing the investigation.