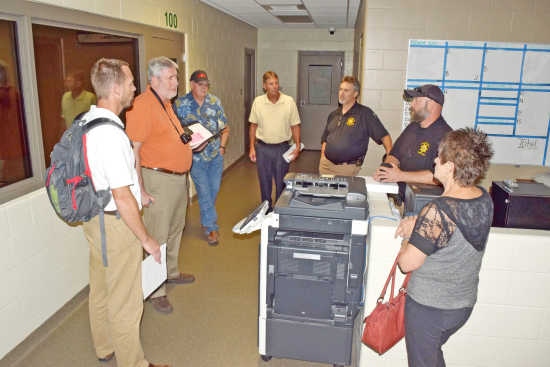 It is, however, serving its purpose well. "It's full most the time," said commissioner Earl McNutt.

Red Willow County officials "cut the ribbon" (they used a bolt cutter on a pair of leg irons) on their new jail a year ago Sept. 15.

With the new jail, commissioners swapped prisoner transportation, vehicle costs, wear-and-tear and mileage, transportation's risks, liability concerns and jail bed rental for 20 years of bond payments and the costs of running their own jail. The jail wasn't built with the idea of making a dollar-for-dollar trade; it's impossible to put a price on the peace of mind associated with not having deputies on the road with and exposing the public to prisoners in transit.

Commissioner Steve Downer said the new jail has increased public defender costs, and that more people are being locked up. "But we're not putting them in and out of cars," said fellow commissioner Vesta Dack.

"The bottom line is, no, it's not a cost savings," McNutt said, adding that it's a convenience to have some place for Red Willow County's prisoners to be housed close-by, without hauling them all over Southwest Nebraska.

Bill Huey, with the architectural firm of Prochaska & Associates, which designed the new jail, said that over time, the jail will prove a better expense than prisoner transportation and bed rent. As capital costs for the jail are paid down, the county will see a savings, Huey said.

McNutt pointed out the advantage of jobs created with the new jail -- one jail superintendent, 13 jailers and the kitchen staff to prepare prisoner meals. "That's a positive ... a very good thing," Dack said.

Another good thing that has developed since the jail opened a year ago is the housing of prisoners for outside law enforcement agencies. "That's a plus we didn't figure in," Downer said. Commissioners did not want the new jail's budget to depend on the revenue of housing prisoners from other agencies. If it happened, great. If it didn't, it wasn't lost revenue.

With no comparisons from previous years, commissioners and jail and sheriff's department officials estimated expenses for the jail's first year. "We like to think they were educated guesses," Dack said. Other than a gas stove that's burning the cookies as well as the pot holders and an air conditioner that's freezing out the office staff (47 degrees is cold), the first year of the new jail hasn't produced any big surprises.

Comments
View 7 comments
Note: The nature of the Internet makes it impractical for our staff to review every comment. Please note that those who post comments on this website may do so using a screen name, which may or may not reflect a website user's actual name. Readers should be careful not to assign comments to real people who may have names similar to screen names. Refrain from obscenity in your comments, and to keep discussions civil, don't say anything in a way your grandmother would be ashamed to read.
Respond to this story