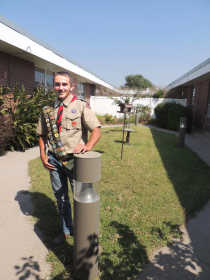 Dustin Payton stands in one of the courtyards at Hillcrest Nursing Home. Payton is hoping to raise enough money so he can build raised beds in the courtyard, so residents can have vegetables gardens. (Lorri Sughroue/McCook Gazette)
Order this photo

McCOOK, Neb. -- Dustin Payton hopes he can complete his Eagle Scout project by October and residents who like to garden at Hillcrest Nursing Home in McCook hope so, too.

Payton wants to build raised beds in one of the outdoor courtyards at Hillcrest, so residents can garden in their wheelchairs or without having to bend over. The project is the requirement of becoming an Eagle Scout, the highest rank in the Boy Scout program. But he has to have it completed by his 18th birthday -- Oct. 27 -- and he has to raise $2,000 for supplies.

But Payton is used to working under pressure. A senior at McCook High School, he competes in cross country, wrestling and track and in between practices and school work, mows and landscapes lawns with his landscaping business, DP Mowing. No stranger to Hillcrest, he has a family friend who is a resident and he used to mow the grass at the facility.

The raised beds would be a welcome addition, said Hillcrest Nursing Home Foundation director, Maggie Repass. "It's a great project that draws attention to the needs of some of the residents that people usually don't think about," she said, who envisions two raised beds, one for vegetables and another for flowers. Repass said some fundraising has already started so the project can move forward, such as bake sales.

Many residents are retired farmers or grew up on farm and growing vegetables is something they've done for years, said Hillcrest Activity Director Tamra Neel.

"They can't kneel on the ground as easily as before so getting something high enough for them would be great," she said. Neel estimated that about 20 residents like to get out and water and weed in another courtyard at Hillcrest, the Red Splendor courtyard.

Payton said he's excited to get started on the project which will entail brick for the raised beds, filling the beds with compost and dirt and refurbishing the outdoor lighting. The first full year of planting will start next spring.

Inger Jacobs, a Hillcrest resident, doesn't garden now but for years grew tomatoes, beans, carrots and more. "It's just what we did," she said. Jacobs sees definite advantages to gardening in a raised bed.

"Bending over isn't the hard part, it's getting back up that's hard," Jacobs chuckled.

Comments
View 2 comments
Note: The nature of the Internet makes it impractical for our staff to review every comment. Please note that those who post comments on this website may do so using a screen name, which may or may not reflect a website user's actual name. Readers should be careful not to assign comments to real people who may have names similar to screen names. Refrain from obscenity in your comments, and to keep discussions civil, don't say anything in a way your grandmother would be ashamed to read.
Respond to this story