'May I take your order?' 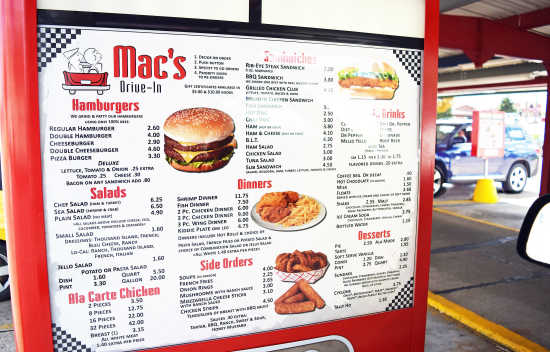 New menu boards have replaced 58-year-old signs in the car-hop area of Mac's Drive-In at 809 West B Street in McCook, Nebraska. While the signs and the menus are new, the logo -- a cartoon couple in a convertible -- is as old as the drive-in's 809 West B location, which was built in 1957, say owners Dave and Angela McCarty. The latest updates -- point of sale ordering (eliminating hand-written tickets), cook monitors and ordering phones -- extend into the switchboard, kitchen and dining room, Dave said. "It's exciting ... as we get used it," he added with a chuckle. Dave's grandparents, Rea and Pearl McCarty, opened the first Mac's Drive-In at 1006 West B (where Club Paradise is now) in 1949. Eight years later, they and their son, Larry, moved the cafe and drive-in to today's location a block east on B Street. Dave took over ownership of the drive-in nd restaurant, a popular institution in McCook, from his brother, Chris, this year.