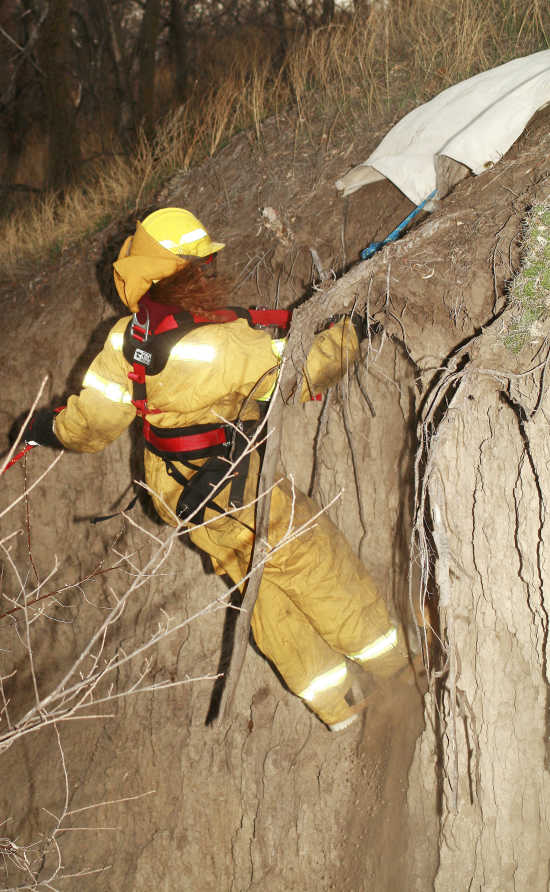 McCook, Nebraska, High School student Amanda Shields of the Red Willow Western Rural Fire Department's new junior program, learns to trust her fellow firefighters and "lean back ... more ... more" as she acquires rope rescue and rappelling skills on a cliff at the fire barn Wednesday evening. Thirteen teens have joined the program and are learning how to fight fires and the skills that accompany and complement firefighting. RWW firefighter and department president Billie Cole said they have two positions still open on the junior program; interested high school-age students can call her at (308) 340-2273 for information. (Connie Jo Discoe/McCook Gazette)
Order this photo

McCOOK, Nebraska -- Being a firefighter is more than just pulling people out of a burning building, McCook High School kids are finding out.

The nuts and bolts, behind-the-scenes work of a firefighter is being learned first-hand by the students, who are members of the recently formed Junior Firefighting program at Red Willow Western Rural Fire Department.

The program, part of the The National Volunteer Fire Council, has chapters across the nation, with the group in McCook getting an enthusiastic response from students, according to Billie Cole, a volunteer firefighter with Red Willow Western Rural Fire Department who has initiated the program.

She recruited students from the high school FFA ag classes and expected only five or six to show interest. Instead, 13 have signed up.

"They are learning everything we do," she said of the students, aged 16 to 18, with students training along side with rural volunteer firefighters.

This means learning how to maneuver rope rescues for a grain bin rescues or rolled vehicles, hazmat procedures to clean up after a chemical spills, as well as training in speed and dexterity to strap on airpacks, and handling hoses and nozzles.

Although students will be able to respond to a fire, they will have to stay at least 20 feet behind the "hot zone," Cole said. But they will be kept busy rolling and unrolling hoses, handing out water and supplying other firefighter items.

It won't be all excitement. Also on tap is a visit to the Nebraska Fire Fighting School in Grand Island, attending a hazmat synopsis and becoming CPR certified.

The junior fire fighting program may also help in the future, said John Clark, a volunteer with the Red Willow Western Rural Fire Department. Clark said recruitment is down among volunteer fire departments and now is the time to get kids involved.

"If we start them young, they can be more aware of what's going on," he said and hopefully want to join a volunteer department.

The program is a win-win for everyone, Cole contended.

The training not only equips students for a future career in firefighting, but looks great on resumes and college applications, she said.

It also teaches kids it's not "all about me."

"Not only do the kids get involved in the community, but it's a very humbling experience to be in emergency services. People come up to you afterwards, so grateful for what you've done."

The City of McCook Fire Department may also partner with the program in the future.