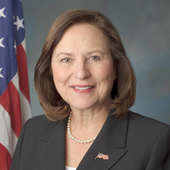 Deb. Fischer of Valentine, Nebraska, was elected to the U.S. Senate on Nov. 6, 2012. Previously, she served two years in the Nebraska Legislature, representing the 43rd District.

A Lesson in political courage from across the pond

From the Senate's earliest days, new senators have respected a ritual of remaining silent during floor debates for a period of time ranging from several months to several years, depending on the era. This is, of course, largely a symbolic gesture. But newly elected senators respect the tradition to show they are committed to using their first days in office to learn the traditions, practices, and procedures of the Senate before speaking on the floor.

In other words, listen first and speak second -- good advice.

On April 8, 2013, I delivered my "maiden speech" on the Senate floor and used the occasion to discuss my plans to bring Nebraska values to Washington. I praised the resilient, hardworking nature of my fellow Nebraskans and highlighted the sound economic practices of the state, which have produced balanced budgets and the second lowest unemployment rate in the country.

I also stressed my support for a limited government focused on fulfilling its core duties and promoting individual freedom and economic growth.

I was pleased a number of my colleagues accompanied me on the Senate floor and listened to my first speech. For those familiar with Nebraska's Unicameral, this may sound like a given. But in Washington, the Senate chamber remains relatively empty when senators speak; the largest gatherings of senators occur during votes.

I was honored to have Nebraska's senior senator, Mike Johanns, join me for the address. Senator Johanns has served as a steady friend during my transition to Washington. My official Senate mentors, John Barrasso (R-Wyo.) and Amy Klobuchar (D-Minn.), attended and offered kind remarks upon the conclusion of my speech. Senators Barbara Boxer (D-Calif.), Tim Kaine (D-Virg.) and John Thune (R-S.D.) also attended.

April 8 was the same day the world lost a transformational leader -- an uncommon woman born into common circumstances, Margaret Thatcher. Alongside her ally and friend, Ronald Reagan, Thatcher helped lead the world beyond the Iron Curtain's long shadow to a freer, more prosperous time. Though most Americans remember Thatcher as a sturdy Cold Warrior, Thatcher's legacy at home in Britain is equally significant.

"Unless we change our ways and our direction," Thatcher argued, "our greatness as a nation will soon be a footnote in the history books, a distant memory of an offshore island, lost in the mists of time like Camelot, remembered kindly for its noble past."

Strong language -- but Thatcher was hardly being an alarmist.

The 1970s marked a grim era for Britain. With the garbage men striking, piles of trash littered London streets. At various times, hospital employees, railway workers, and gravediggers all went on strike. The once great British Empire had been brought to its knees, effectively paralyzed by overregulation and over-taxation.

Instead of blaming others, Thatcher led -- and she reformed. She cut taxes, privatized industries, stood up to labor bosses, and curbed runaway spending. Thatcher accomplished all this with outsized courage and unusual political skill. She earned her nickname of the "Iron Lady" by standing for principles with a spine of steel, regardless of opinion polls or chatter from the pundits. "The lady is not for turning," she famously stated.

As The Washington Post editorial board rightly noted, Margaret Thatcher was, "in every sense of the word, a leader." An unapologetic conservative, Thatcher worked tirelessly to reform the welfare state that had come to stifle the British economy.

The Iron Lady's legacy of unflinching boldness in confronting economic doldrums at home and pervasive communism abroad stands as a gold standard for all elected leaders seeking the political courage to make difficult decisions. The world is a better place because Margaret Thatcher led when others lacked the mettle.

I admire Thatcher's resolve and principled positions, and I hope to stand tall for Nebraska values as a United States Senator in Washington.

Thank you for participating in the democratic process, and I look forward to visiting with you again next week.

More from this columnist · U.S. Sen. Deb Fischer
Respond to this story