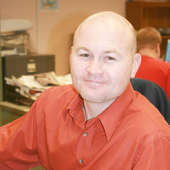 Let the coaches coach and the fans grumble

Declan began his basketball career last weekend with his first practice. As much as I have been wanting to criticize my daughter's coach every time something goes wrong during her high school games, it was a nice refresher for me to be reminded just how difficult a job our youth coaches have.

My daughter plays for the DCHS Red Devils in Oberlin, Kansas, who have had a rough couple of seasons. Last year their varsity girls basketball program amassed only three wins, and I believe the season before they won even less. They lost a couple of graduates heading into this season, but they lost even more players to frustration.

This year, the very same DCHS girls basketball coach, has taken his one senior and collection of other young players with minimal varsity time, and got them off to a 3-1 start, equaling last year's combined win total by the fourth game.

Their offense is still struggling and I have been frustrated with their inability to simply get the ball across mid-court at times, but there is no mistaking their improvements on defense. They are also playing with a tenacity that keeps them firing on all cylinders regardless of whether or not they have the lead, which I credit for a near comeback in their most recent game.

Last week Hill City jumped off to a significant lead early in the game, with everything they threw near the basket seemingly falling for the first two quarters. Oberlin's improved defense through the prior four games wasn't able to stop their hot streak, which happens to even the best defenses. I found myself feeling some familiar frustrations from last year as I watched the lead grow.

Hill City did eventually win the game but this loss was far different than many I sat through last year. The DCHS girls didn't give up, there was no surrender on the court as likely would have been the case in season's prior. They amped up their defense in the second half and cut the lead to single digits, with plenty of time remaining.

Unfortunately their aggressive defense had necessarily caused some fouls and just as the game seemed to be getting within reach, a pair of their starters fouled out within a few minutes of each other. The remaining players played admirably, but Hill City's offense renewed itself and allowed them to again stretch their lead in the final minutes.

The game was still a loss, however, it was a blast to watch, especially the Oberlin squad's determination and effort exerted in their attempt at an unlikely come from behind victory.

As I watched Declan's first grade coach struggle to keep the attention of the grade schoolers during their practice, it was much more obvious how tough a job our local coaches have. Most of the players on Declan's team were more interested in who was watching them from the glass-overlook at the YMCA, than whatever drill they were supposed to be running.

It seemed simple enough, dribble from here to here, stop and shoot. But if you're admiring the biggest ceiling fan you have ever seen in your life when the coach is giving those directions, I suppose the results may very well be comical to watch.

I can't wait for Declan's next practice or Shawn's next game. I have been instructing myself that I will be more controlled with my grumblings the next time the girl's game doesn't go their way. That may be more difficult than I am admitting, hey, look at that ceiling fan.

More from this columnist · Bruce Baker
Respond to this story