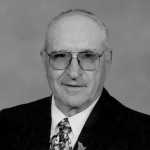 Cliff was born Nov. 10, 1927, in Ogallala, Nebraska, to Marion and Elda Vontz. He spent his childhood in Nebraska and was the eldest of six brothers. He quit high school at age 17 to serve in the U.S. Navy during World War II and was assigned to the carrier ship, the Hoggatt Bay, where he trained to be the ship's pilot. He returned to Nebraska after the war to finish high school and from there went on to acquire his bachelor's and master's degrees from Western State College in Gunnison, Colorado.

On June 3, 1947, he and Patricia Joyce Marts were married in St. Catherine's Catholic Church in Indianola, Nebraska.

After earning his degrees, he returned to Indianola, where he taught and coached before moving to Hotchkiss, Colorado, in 1957. He spent the remainder of his teaching and coaching career at Hotchkiss High School. His teaching tenure also included the positions of assistant principal and school counselor. His coaching career included track, football, basketball and wrestling. He received the Coach of The Year Award for Delta County School District.

Upon his retirement from the school district, he managed the orchard division of Westmoreland Coal Company in Paonia, Colorado. Cliff was recognized and awarded "The Pear Grower Award" by the Western Colorado Horticultural Society in 1992.

Cliff was a member of Immaculate Heart Catholic Church. He was an avid sports fan with a a particular fondness for his Nebraska Cornhuskers. He enjoyed golfing, carpentry, playing cards and fishing.

His family wrote "Cliff lived his life with dignity, integrity and honor. He led by example. He was a kind, gentle man and will be missed greatly by his family and friends."

He is preceded in death by his parents; and brothers, Larry Vontz and Phil Vontz.

A Mass of Christian burial is Monday, 11 a.m., at Immaculate Heart Catholic Church in Grand Junction. Interment will be later in the V.A. Cemetery.