'For the love of dirt' 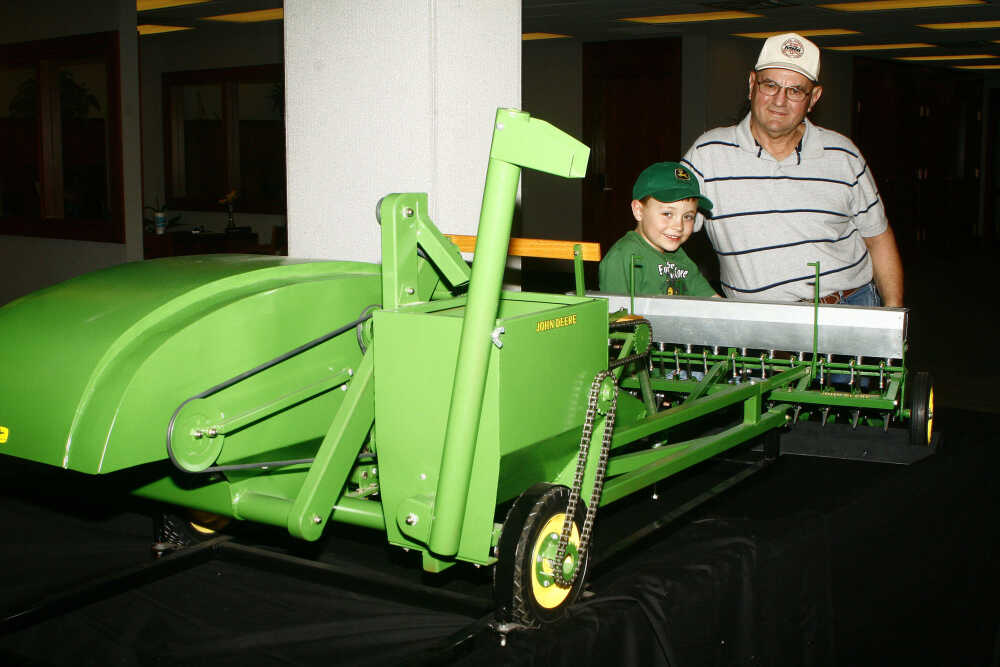 Brady Esch poses with Grandpa Vern Esch and the quarter-scale John Deere combine and International Harvester corn picker that Grandpa designed and built in his welding shop between McCook and Indianola. McCook National Bank is displaying Vern's collection of down-sized farm machinery during March, "National Farm Month." "The corn picker's 'the cream of the crop'," Vern said with a grin, explaining that he has about 200 hours in its creation. Vern doesn't use patterns for his machinery. "I go by the real thing," he said. "I reduce it by four. That's what a pedal tractor is." The machinery is "just to look at," he said. The grandkids -- four granddaughters and Brady -- are too big to actually fit on them. They're displayed in "Grandpa's Museum," a little building beside Vern and Sarah's home near the Southwest High School. He's working now on a one-row corn binder, but it sometimes get put on a back burner. "That darned ol' farming gets in the way of my playin' around," he chuckled. Vern also makes wooden rocking horses, and since making the first one in 1983, has given away 95 of them; others have been raffled off for good causes. "All I get out of it is a nice smile from a little kid," Vern said, with a smile of his own. Brady is the seven-year-old son of Mary and Brian Esch; he wears a John Deere-green shirt that says, "For the love of dirt," and carries on his belt loop a farmer's "badge" -- a pair of pliers in a leather case.