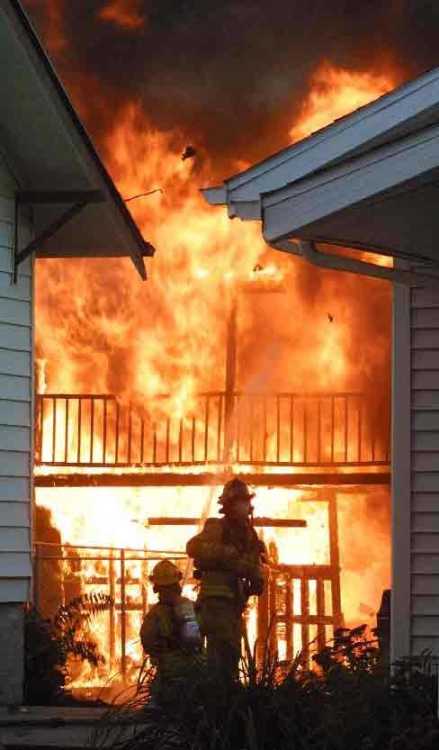 Sparks from a cutting torch started a fire that smoldered for some time before growing into the raging inferno that engulfed and destroyed a garage and loft apartment in McCook Saturday evening.

McCook Fire Chief Marc Harpham said this morning that Dylan Rutcker's and Tiffany Reed's garage and unoccupied apartment, at 207 East K, is a total loss. Fire damage to the garage/apartment and contents and heat damage to the couple's home and the neighboring home and garage at 209 East K is estimated at $85,000.

Harpham said neighbors discovered the fire at 6:21 p.m., and the structure was fully involved in fire when firefighters arrived within minutes. "Firefighters were faced with the task of extinguishing the main fire and protecting the neighboring structures from the heat radiating from the fire," Harpham said.

It took about 20 minutes to bring the fire under control.

Harpham said that his department's and a state fire marshal's investigation revealed that the fire was started by sparks from a cutting torch used earlier in the day in the garage. Sawdust on the floor smoldered next to an exterior wall, Harpham said, and because the garage was closed up, the heat built up and possibly ruptured an oxygen bottle. With the addition of oxygen, "there was a huge fire inside," he said. "Everything near the point of ignition was completely burned to ashes," he said.

"It appears that the fire smoldered for some time before it burned through the garage area and was found by neighbors, who called 911," he said.

Explosions during the fire are blamed on paint cans, aerosol cans and acetylene and oxygen bottles rupturing.

Harpham said that 18 McCook firefighters and members of Red Willow Western responded to the fire with two pumpers, one ladder truck, two ambulances and one rescue unit. A state fire marshal was called to help investigate.

"We cannot stress enough the importance of getting out of your house when it's on fire, and calling 911 from a neighbor's house," Harpham said. "All fires start small and progress rapidly -- within a couple of minutes -- to a large dangerous fire.

The sooner you can escape and call 911, the sooner the fire department can respond and extinguish the fire."