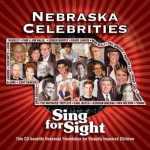 Most are familiar with McCook's own Ben Nelson as 'Senator Ben -- the maker of laws in the Senate.' But Senator Ben Nelson is getting quite a bit of attention these days for his recording of "Western Town"! He is one of the "singing celebrities" on the new "Nebraska Celebrities Sing for Sight" CD -- a fundraiser for the Nebraska Foundation for Visually Impaired Children (NFVIC) -- helping children with visual impairments.

"Western Town" has the Senator proclaiming in song -- "I'm from a western town in Nebraska" and telling how he loves to return home. A soon-to-be-released movie, Out of Omaha includes Senator Nelson singing Western Town. The Senator plans to attend a special screening of this movie in Omaha on March 4 at Westwood Theatre.

A mixture of pop, show tunes, country western, lite rock and more, this album is the brainchild of Karen Sokolof Javitch, songwriter and former teacher of the blind. She is donating all of the income from the CD to NFVIC - Nebraska Foundation for Visually Impaired Children. "This was a great way for me to combine my love of songwriting, children and local celebrities!" Javitch stated.

Conor Oberst of Bright Eyes donated his song First Day of my Life. Chuck Penington, of Mannheim Steamroller, wrote and recorded One More Time, for Gordon MacRae. Senator Nelson recorded a country western song of Javitch's called Western Town in Nebraska, which is going to be featured in a future movie: "Out of Omaha."

Dick Boyd who retired last year from a 30-year portrayal of Ebenezer Scrooge at Omaha Community Playhouse teams us with Elaine Jabenis, "Grande Dame" of Omaha theatre, in a beautiful duet version of It's Turning to December.

Not only is the CD fun to listen to, but it's for a good cause! Biographies are on the insert.