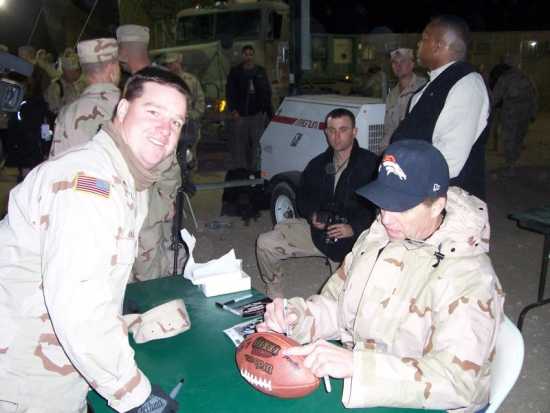 Denver Broncos legend John Elway signs a football for Sgt. Aaron Haag of Indianola during a visit with troops in Kuwait. Haag, a longtime Broncos fan, obtained the ball, already signed by franchise owner Pat Bolen, from a friend in his unit. Elway, Robin Williams and other celebrities visited the troops. Haag sent the ball, along with photos signed by Elway to his little brother, Mark, a senior at Southwest High School and also a Broncos fanatic. They are the sons of Dick and Jan Haag of Indianola. A member of the Army Reserves 1013th Quartermaster Corps in McCook, Haag is on his way to Iraq.