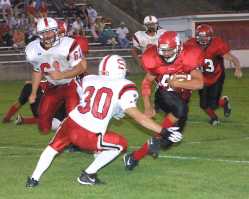 McCook High School junior tailback Brendan Liess is about to be tackled by Scottsbluff's Chris Himes (30) during the third quarter of Friday night's season- and home-opening football game at Weiland Field. Liess, who rushed for 183 yards and two touchdowns, suffered a sprained knee on the play and sat out the rest of the contest. The McCook Bison defeated Scottsbluff 34-0. McCook plays at York next week. (Connie Jo Discoe/McCook Daily Gazette)

Liess ran for 100 yards in the first half and 183 overall and scored on touchdown runs of 25 and 58 yards as the Bison rolled to a 34-0 victory over Scottsbluff.

McCook, winners of 27 consecutive games including back-to-back 13-0 Class B state championship seasons, has outscored the Bearcats 99-0 in the last three years.

"We came out and did everything we wanted to on the first drive," said McCook head football coach Jeff Gross. "We had some breakdowns in the second quarter.

"In the second half, we adjusted and ran between the tackles. Tony Purvis (Bison junior quarterback) did a good job of running the offense.

"It was an all-around good effort. We have some things to clean up."

McCook rolled up 421 total offensive yards, including 381 rushing. The 40 yards passing came on one play when wide receiver Brian Winder took a sure interception away from a Scottsbluff defender.

With the Bison leading 7-0 at the start of the second half, Liess took a handoff from Purvis, started left, broke right across the field and outran the Bearcats' defense for the 58-yard TD with 9:29 left in the third quarter.

Liess, who scored his first TD with 9:15 left in the first quarter, sprained his knee on the Bison's next series when he was tackled hard, and sat out the remainder of the game.

Gross said he didn't want to take any chances with Liess with the game's outcome no longer in doubt.

"He's got first degree sprain of the lateral collateral ligament. We could have played him in a close game. Jeff Klug is a quality back -- he could start for 31 other Class B teams."

In Liess' place, senior fullback Alex Beam ran for 72 yards, Craig Fritz 64 and Klug 36. Purvis and Klug scored on TD runs of 3 and 2 yards in the third quarter.

Fritz put the icing on the cake when he broke loose for a 48-yard TD run late in the fourth quarter.

Josh Cherry kicked four extra points. The Bison missed one PAT because of a penalty.

"Our offensive line won the game for us," Gross said.

He added that many of the same group also dominated on the defensive line.

"We're pretty good upfront (on defense) -- that's why Scottsbluff had to go perimeter. We just had some technique flaws. Our secondary did a good job."

Gross said he was pleased with the Bison players conditioning for the first game of the season.

The Bison hit the road next Friday for Week 2. McCook takes on York at 7 p.m.

The Bison defeated the Dukes 16-13 in overtime at Weiland Field.