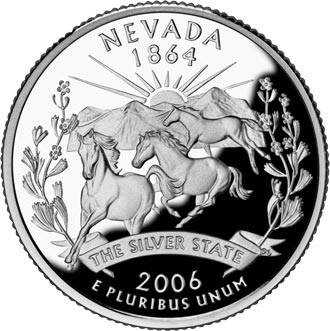 Every state has its own slogan, or slogans. When I was a kid, the Nebraska license plates said "The Beef State". Now Nebraska's official slogan is "The Good Life", which from my experience was pretty accurate. Now Margie and I are in "The Silver State".

The Silver State is the nickname for Nevada, dating to the Nevada silver rush of the mid 1800's. Back then, silver was literally shoveled off the ground. Heavy gray crusts of silver had formed on the surface of the desert over millions of years, and were polished by dust and wind to the dull luster of a cow horn (called "horn silver"). A large silver deposit could be 20 to 40 yards wide, and more than a 1/2 mile long. These "surface bonanzas" lasted only a few seasons, long enough to put up saloons and little else. Historians say the rough, violent life of many western movies reached its purest state in the Nevada silver camps.

We live in Nye county, which is is the third largest county in the lower US of A. Nye county is home to the famous Area 51 "secret" military base, so there is a large area nobody knows much about out here. Our "town" isn't officially a town at all as it's unincorporated, but has a population of over 30,000. For being unincorporated, it sure is a busy place. Our trip to the DMV for drivers license and vehicle tags took hours, not minutes like it did in Furnas county when we first moved there. In Nebraska, you get your drivers license when you visit the drivers license office, here in Nevada they have to mail your new license to you. Nebraska has "motor-voter" laws that permit voter registration at the DMV when you get your license, here you have to go to the county offices to register to vote.

It's a bit drier here than SW Nebraska as our annual rainfall averages a little less than 4" a year. Nevada is the most mountainous state, and the 9th least populous. Oh yeah, prostitution is legal around these parts. I admit seeing billboards for brothels is something new.

Most of Nevada is owned by the US Government one way or another. Military, US Forest Service (the largest National Forest in the lower 48 states), BLM (Bureau of Land Management), FWS (Fish & Wildlife Service), National Park Service, Bureau of Reclamation, and likely more are Federal land managers. As near as I can tell, somewhere around 87% is under Federal control, but I find it odd that nobody really seems to know exactly how much. Nevada is the 7th largest state and only slightly smaller than Italy.

Margie and I joined the local 4x4 club, and we'll share some pictures from The Silver State now and then from some of the back country roads we moved here to explore.