Who Has My Vote? 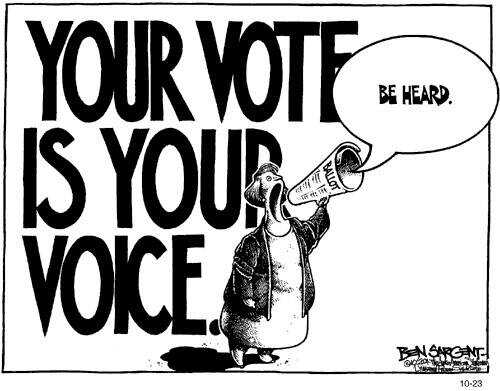 Image from The Sierra Madre Tattler

I'll be happy to share the candidate I'm supporting this election cycle... Nobody.

Nobody apparently has a clue as to what we the people expect from our elected officials.
Nobody really cares about the unemployment rate.
Nobody cares about the federal budget.
Nobody is an honest politician.
Nobody is completely open and honest with his past education, birthplace, business dealings, income taxes, yadda yadda yadda.

I just got back from a trip through Colorado Territory, and the ad campaigns for the presidential election are in full swing. Obama and Romney TV ads are pounding the lucky folks of Colorado with a constant barrage of ads that do everything but state what the candidates will actually accomplish... which I expect from past performance of all the bums to be pretty much nothing. Each side is really good at pointing fingers in an attempt at hiding their own shortcomings.

Our current congress has the lowest rating of my lifetime, our President is accused of being from a foreign country with an agenda to destroy our country, while the challenger is accused of lying about his involvement with specific business interests, and having an agenda to help make the rich richer at the expense of the masses.

In a country of over 300 million people, we can't seem to figure out how to elect representatives that don't pad their own pockets, are open and honest with their financial and personal documentation to the point that there is no question whatsoever about their validity, and move the country forward instead of kicking the budgetary/social issue can down the road for someone else to deal with.

Unfortunately for the people of this country, we're the ones about to suffer from their ineptitude to negotiate and solve problems, and their ability to create diversions to hide whatever agenda they all seem to have hidden.

Perhaps we should all support Nobody. We know what we've had by supporting establishment politicians... how about a wholesale replacement of our federal elected officials? What have we got to loose by voting for Nobody? Have we already forgotten how effective our current elected officials have been? They don't take their responsibilities seriously like the most basic funding issues for the Post Office and transportation, often put in a "stop gap" bill to fund government for a few more months while the problem never goes away like the looming "fiscal cliff" put in place last year. Since they couldn't negotiate a real solution, putting off decisions until after the election seemed the best solution to these whiz bangs I suppose to get re-elected.

I know it won't happen. People will contend "I'm not wasting my vote" by voting for someone with anything other than a highly financed, professionally run campaign. If you are not Republican or Democrat, you can't win so don't waste the vote. It's obvious we Americans are a bunch of sheep following whatever political party line we ascribe to, whether we really know the facts or not. TV ads obviously work since so much money is spent on them. The voting masses must be making their decisions based on advertising... what a shame it's come to this. With so much money spent on political advertising, whoever has the most bucks will be winning the election again this year and so far it looks like a Romney victory... oh boy, another slick politician obviously with something to hide.