Somebody Had To Be First... 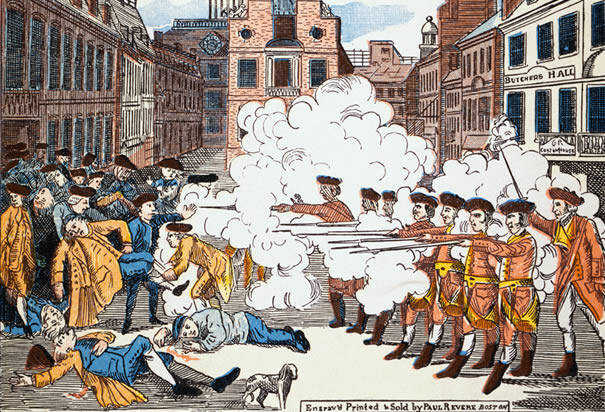 Another Memorial Day weekend is upon us and like most folks, I've seen the news accounts of our active duty troops placing American flags on graves in our National Cemeteries. The sight of uniformed troops placing flags at every headstone is very humbling to me... I guess it's simply because of the sacrifice made.

The USA has buried over a 2 1/2 million men and women during our military conflicts. We all likely have thought about the last combat death in a war thinking what rotten luck to be last, but what about being the first troop killed in action?

Today I want to mention the first widely recognized combat death in our countries history. Before the shot heard 'round the world, history states that the first recorded death occurred on Feb 22, 1770. That's the date that a young man was killed by a British Customs Agent.

The innocent, first victim of the
struggles between the Colonists and
the Crown, which resulted in
INDEPENDENCE.

I didn't know the events triggered by the death of Chris Snider, and if you are interested, I'd like to suggest that you visit ---> Christopher Snider for a very brief history of his life.

Our country continues to struggle overseas with the number of deaths continually climbing. The Bible promises there will always be war, or rumors of war, and just here in the USA we can see that prophecy being fulfilled.

This Memorial Day, be sure to say a special prayer for those that have given and will give the ultimate sacrifice for our liberty.