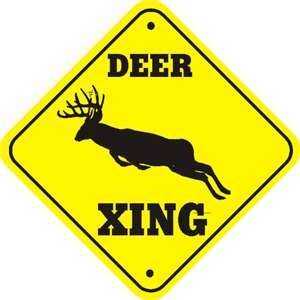 The number of deer in these parts is impressive if you like deer. We see them all the time, from the family that frequents our back yard, to the dead ones along the road. I've heard that most local farmers are not too impressed with them as the sheer numbers can eat up a lot of profit in the fields.

It was few weeks ago that I hit our first deer in Nebraska. It was getting dark, and I was driving below the speed limit on US 6 & 34 between Bartley and Indianola when of course a deer appears in the middle of the road. Now I know not to swerve at high speed, but I did brake hard, moved slightly to the right and it looked like it was going to be a near miss when the deer jumped right and we "kissed". I was down to maybe 20MPH by then but the unmistakable "thud" of an impact on the right front was heard, but the deer kept on going... and so did we on to McCook.

Upon inspection, the damage was minor when compared to other vehicles that we've seen that have collided with a deer. The hood, grille, and headlights all escaped while the bumper and fender were the victims. My neighbor asked me a day or so later how much I thought the damage would be and I said "5 or 6 hundred I suppose", to which he laughed and said it was only a scratch then.

So sure enough when we took the car to the Cambridge Body Shop for an estimate, it came in right at a thousand bucks, and that was if they didn't have to paint the entire fender. If they had to do the whole fender, it would be more as the hood and door would have to be paint "blended" in to match. Of course our insurance deductible is higher than the estimates.

We went ahead and made plans for a trip to Colorado Territory and to drop off the car for repairs. When we returned, the car was ready, and guess what??? It turned out it was "only a scratch" repair after all as some work went better than thought and we paid less than the estimate.

Now I can't say with complete certainty that a big city body shop would have played as fair as the Cambridge Body Shop and charged only for the work done, but I doubt it. I'm sure I would have paid the full estimated price and to be completely honest, I was flabbergasted that the bill came in nearly 500 less than the estimate.

Now I know the bill could have gone the other way and cost more, but the fact that Daren Mowry runs an honest and ethical business in this day of questionable business practice and ethics nationwide is refreshing to me.

Thanks Cambridge Body Shop. Two thumbs up from the City Slicker!