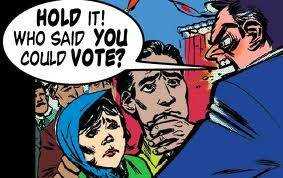 I own guns. I shoot guns. I will also admit that I have wondered if private citizens should have the right to own military grade weapons such as AK-47's and 50 caliber machine guns. Beyond pride of ownership and perhaps the enjoyment of firing a weapon of that type, military grade weapons are really just for war aren't they?

We've all heard the old saying "If guns are outlawed, only outlaws will have guns" and that's something I can get behind. All we need do is read any big city paper and gun violence jumps off the pages into our faces. Of course outlawing guns won't work, and our Constitution guarantees our right to bear arms.

But what about certain types of weapons such as military arms? I hope you will allow yourself a cup of coffee and the time to watch the following dramatization of true events that happened in Athens, Tennessee in 1946. It's a 13 minute video that may change your thinking or reinforce your opinion. If you start, watch 'till the end.