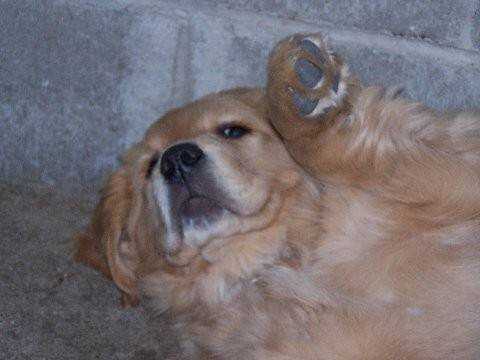 The Blaze - Ready For Action!

Ah... The pitter patter sound of little feet racing across the floor. It must be The Blaze!

I recently mentioned that we got a puppy that we named Blaze... I'm beginning to think we got the name right based on the speed at which he moves around the house. For starters, I can't believe how fast this dog is growing. 25 pounds as of yesterday and he's now 12 weeks old. The size of his feet and legs has me a bit concerned...

When my farming neighbor first met Blaze, his comment was "that sure is gonna be a big dog if he ever grows into those feet and legs". What I'm seeing is that the legs and feet continue to get bigger along with the rest of him. What do suppose this means?

Beyond potential size, this pup can't help but follow his nose, even if that nose is pointing downward. Blaze can dig a foot deep hole faster than you can say... you get the idea. Going for a walk around our farm(stead) has him searching for whatever nastiness he can find. I've learned we have an abundance of dead animal parts and pieces around our place that is diminishing daily as the dog finds another piece of a long dead rabbit or discarded tail of a field mouse.

When we're walking and he smells something, he has determination and that speed on his side that is tough to beat. He walks well on a leash when we go to visit my mother in town and he is an "angel" then, but on the farm(stead) I want to let him run when I walk with him and I've already been trained by him that no amount of control is going to stop him from finding stuff.

Puppy teeth... they may have been used in torture chambers of old. Now I have no basis for that comment other than if you saw my arms, you might think I was being tortured. Unfortunately, I'm slow and I do love playing with my pup, so I'll just suffer through it... those puppy teeth WILL fall out one of these days I'm sure.

Toy Story - I never did see any of the Toy Story movies, but our house could probably qualify for one now. Trying to keep Blaze' toys picked up is about like trying to keep him from following his nose outside... impossible.

The Land Of No! Blaze knows the meaning of the word no... he just chooses to ignore it now and then. He reminds me of an old Dennis the Menace cartoon where Dennis is telling his Mom as she is dragging him home under her arm... "You didn't sound like you were really mad yet".

A couple weeks ago, Margie and I looked at each other and wondered if we could keep up with The Blaze. We're still undecided.