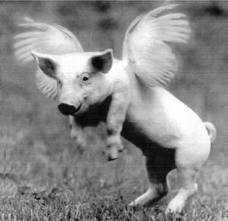 You likely have heard the expression "when pigs fly" used to express the notion that whatever you are talking about won't happen. Did that make sense? Maybe to put it another way, it means that the event being discussed will only occur when pigs fly, which isn't very likely.

I've used that expression I'm pretty sure, but I ran across some flying pigs this morning and just have to share my experience...

As you probably know by now, I'm an amateur (ham) radio operator, and many "hams" like to operate during specific times set aside for contesting which is primarily a radio game of see how many contacts you can make. There are seemingly hundreds of ham radio contests out there for low power operators, Morse code guys, international (DX) contacts, and many many more.

I just learned about one of these contests set up by the Flying Pigs Amateur Radio Club. Their monthly event is for low power (like the power of an old walkie talkie) ham radio operators and is called "Run For The Bacon".

Now I give low power operators a lot of credit. It can be very hard to talk to somebody with a radio with such low power output. Yet these guys seem to be able to work other hams anywhere on the globe when conditions are right... sorry I digress.

So when I saw the information link associated with the Run For The Bacon contest, I couldn't resist clicking on it since I thought it was a clever name for some reason. Once I got to the info page, I was presented with the rules of the contest, and the self serving hype... "It's Pignacious Fun".

Pignacious may or may not be a word I suppose, but I did do a Google search on it and found the following video from a Chicago local access cable TV channel. After viewing it, makes me glad I moved away from the city! I find it somehow disturbing for some reason, but it only proves that if you take a trip not knowing where you are going, you very well can end up somewhere perhaps you wish you hadn't.

There might be a bigger lesson there about where you and your life is headed, but only you can figure that one out.

So without further Adieu... King Pignacious!!!!!!