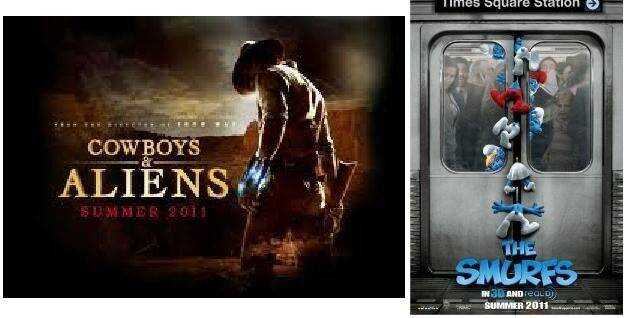 It was a hot dusty afternoon, both in McCook and the starting scene of "Cowboys & Aliens". With a title like that, what could you possibly expect considering that James Bond (Daniel Graham) and Indiana Jones (Harrison Ford) are the primary actors?

We don't get out to see a movie at the theater very often, but this weekend was hot, and one of my favorite actors was playing another of his tough guy roles. No matter how bad a movie with Harrison Ford is, it won't be money wasted as far as I'm concerned.

After watching "Cowboys & Aliens", I walked out the door thinking... that movie was made on a drunken bet. I thoroughly enjoyed it. It's stupid.

"Burp... I'll take that bet!"... and so the Internet website headline was born.

I must say I'm not a Smurf fan, but face it, movies with such unlikely titles and story lines facing off at the box office for income supremacy shouldn't be shocking to anyone.