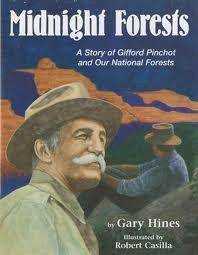 In some of my previous blog entries, I've bashed the USDA Forest Service some, so I started the day thinking that I would write about Gifford Pinchot. Gifford Pinchot was the first director of our National Forests. Now this is a bit misleading as there were other men in charge of the nations forests prior to Gifford, but he has the distinction of being in charge when the name was changed from "Forest Reserves" to "National Forests".

But during my research about Gifford Pinchot, I got sidetracked as often happens. It seems that just over 100 years ago, our president Teddy Roosevelt and old Gifford pulled a fast one on Congress by establishing what became known as the "Midnight Forests".

The short story is that Congress renamed Forest Reserves "National Forests," and outlaws their further creation or enlargement in six Western states (Oregon, Washington, Idaho, Montana, Colorado, or Wyoming). The exception is by act of Congress. When the bill passes Congress on February 25, 1907, Pinchot and Roosevelt identify sixteen million acres of forest in these six states which are designated as national forests before the bill was signed into law on March 4, 1907.

March 2, 1907 was a very active day for National Forest creation and expansion. According to www.foresthistory.org, more than 20 forests were created, expanded, renamed, and combined.

So if you are visiting or camping in National Forests throughout the West, remember that there is a very good chance the place you are standing is protected thanks in part to some underhanded political trickery.

I suppose we're in for some more "underhanded" politics with the current budget discussions. I somehow doubt that whatever underhandedness this Congress comes up will be nearly as beneficial as what Teddy and Gifford pulled off.