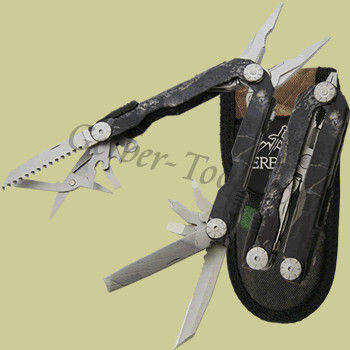 Around these parts, a lot of guys carry a pair of pliers on their belt. I suppose these guys have found that a pair of pliers is all they usually need tool wise to accomplish any number of tasks around their property/farms. From bolt tightening to wire stripping, a pair of pliers can do many tasks. However, I like to think that I have a better tool.. I have what I like to call "the magic tool".

There are many companies that make multi-tools. Leatherman is probably the best known brand, but the granddaddy I'm sure is the Swiss Army Knife. There are many different combinations of the SAK now-a-days, with one model claiming it has over 25 tools, and even includes a toothpick for your after dinner needs. To me, these SAKs are more like toys than tools.

My magic tool happens to be made by Gerber. It's is an ingeniously designed tool with a couple different knife blades, a Phillips head and two sizes of standard screw drivers, and a folding pair of pliers that is easily the strongest I've encountered in a multi-tool, and can be opened with one hand easily.

My magic tool is proven to work. Now I can't really say why, but I've fixed more things with my Gerber multi-tools over the years than I have with all the tools in my tool box. If you noticed, I said tools, and I admit that I've broken two, and I'm about ready to go for my third in nearly 15 years of daily use with a minimum of 10 uses per day. I don't get dressed without it. The reason I've had to replace them is that while it is one tough tool, it is not a pry/wrecking bar though I've tried with obvious limited success. They can't loosen a 3/4" nut very often, and attaching a "cheater" lever to the handle isn't the best idea. I'd have to say that I have far exceeded the tools design limits.

The reason I know it's a magic tool though is what happens when it not affixed on my belt. For example years back, the one and only time I have ever run out of gas occurred when my tool was in my bag and not on my belt. This occurred on a trip Jeeping in Moab Utah on Margie & my 10th anniversary. Let me just say that I made a big mistake.

More recently, Margie and I went Geocaching. We've hunted hundreds of caches over the years, and have only not found our target twice... until I didn't have my tool that is. Of 4 caches we last went in search of, we found only one. It was only after returning from our disappointing search that we discovered the magic tool sitting on top of the kitchen table. You decide if it made a difference, but from our past experiences, we think it matters somehow.

Other times have proven the usefulness of the magic tool in all sorts of situations to the point that complete strangers have commented that without the tool, the task couldn't be completed. It has unique power, much like that of my acquaintance Murphy I've spoken so fondly of, that transcends the ordinary. It's a normal question from Margie asking if I have my "tool" before we go somewhere... it has proven itself that much.

With Father's Day approaching, you may be searching for the perfect gift idea and you now have my recommendation. Not as cheap as a pair of pliers, but hey... it's magic!