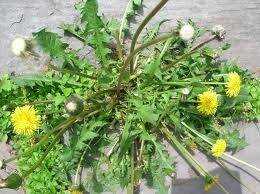 The grass is turning from brown to green, the trees are popping out from their long winter naps, and there is a dramatic increase in the number of very small cattle in the fields... It's Spring!

I love this time of year... mostly. I love seeing all the new life and growth that Spring brings. But there is a dark side to Spring for me. Long time readers of the City Slickers know of my war with the weeds. From a historical perspective, Margie and I have slashed, hacked, chopped, dug, employed chemical weapons, burned, and utilized mechanized assault vehicles (riding mowers), and even gone so far as hand to hand combat with a dandelion digger. All with limited success. We have not tried eating them.

I've resolved myself to the fact weeds are terrorists. You can't kill 'em all no matter how hard you try. They won't listen to reason (I know, I've tried talking to them), and they won't stop trying to claim more territory. They don't seem to have a good leadership structure, but their communication systems are unstoppable. I'm locked into a never ending siege of advance, counter attack, and retreat. The only weapons I haven't tried are biological (goats) but I don't want to mess with livestock of any kind... I'm a city slicker remember?

I've got enough firepower and influence to control specific areas, and we've got a fair start around the house for sure. But no matter how large an area I control, there is always that fringe where the enemy enjoys impunity. Unless some new technology development occurs, it seems I'll be locked in a battle with my terrorists as long as I'm around. Of course, we could try eating them to see if it makes a difference... naw.