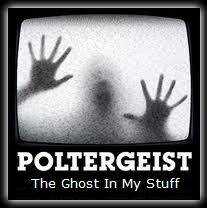 A Picture Of Murphy?

A poltergeist is a paranormal phenomenon which consists of events alluding to the manifestation of an imperceptible entity. - from Wikipedia.

Now what, you may be asking yourself, is Brian going to blog about today?

Well, you may have guessed it, another story of Brian and Murphy getting into a tussle. I've spoken of my "friend" Murphy on several occasions and his impact on projects and other goings on around our farm(stead). Many of you know old Murph... he's the the guy that came up with that well known law... what can go wrong will go wrong. I need to include the theorem that says you get what you pay for, as that is what started me down a path of no return...

Part of projecting around the farms house has been adding a new 3/4 bathroom. I'm somewhat handy at most of the renovation stuff so the project is going along actually quite well. I've got the walls, plumbing, and electricity all working properly, and have only a bit of finish work to do.

Everything was working great when suddenly, the "inexpensive" ground fault electric outlet failed to reset after a test. I figured the law about getting what I paid for had once again bitten me and now I was gonna pay some stupid tax, so off I went to buy another new GFI outlet.

It was cold, and the sidewalk was icy, and WHOOPS! Down I went. Luckily for me, I didn't hurt anything important and was able to continue on my quest for a new outlet, but I know my wrist was getting pretty stiff awfully fast. No matter, I got a top of the line replacement and headed for home.

Once I tried to use a screw driver, I learned the extent of my injury to my wrist. Sprained for sure, but probably not broken I think. Sure can't use it to twist on a screwdriver so I'll try with the left hand. Big mistake.

Now I won't say I'm a klutz, but trying to use a pointed tool with my left hand isn't the best idea I guess. I dunno how I managed it, but during the process of trying to replace the GFI, the fan switch next to it got damaged and need replacement now.

HA! I thumb my nose at old Murphy... I've got another switch in the basement. I quickly find the switch, slowly get it and the new GFI installed and head for the circuit breaker panel to restore power.

I flipped the circuit breaker switch to "ON" and Murphy yells out "HA! That circuit breaker is now (it is his law you know) defective... it won't break no more buddy!" Oh crap, now what?

One thing I've learned about living here in the country is that needed supplies are seldom real convenient. Off I go again for a new circuit breaker, but my friends at Lord's have one that is similar, but a little bit different... should I try it?

I bought it, but since I'm way over half way to McCook already, I decided to continue on to the electric supply house and pick up another breaker just in case. I give the Lord's procured circut breaker a shot and it works like a charm making me think of returning the extra breaker.

I have since decided to hang on to the spare circuit breaker as I have a feeling that Murphy is watching, waiting...