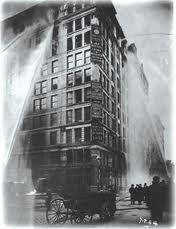 Today, one hundred years ago, a fire changed America. Have you heard about the Triangle Shirtwaist Company fire? 146 workers were killed, most were women, and the youngest were only 14 years old.

In the days of the industrial revolution, many workers were really put to the test by their employers. Unions got a big boost from companies that mistreated their workers, and the Triangle fire turned out to be a wake up call for workers safety and rights nationwide.

Please watch this short youtube video on the fire... http://www.youtube.com/watch?v=rf9GVbzf7Q4

Organized labor is under a lot of pressure now-a-days. A lot of folks seem to believe that unions are the root of all evil now and then, but the sad truth is that without unions, incidents still occur like the Triangle fire.

Within the last 6 months, December 2010, workers are still jumping out of buildings... http://www.guardian.co.uk/world/2010/dec/14/bangladesh-clothes-factory-workers-j...

OK, so I know that was not in the good old US of A. It was however in a modern company where production is pushed to the limit just like one hundred years ago. Is there a lesson to be learned?

The next time you want to bash unions, I ask you to also recall "thump, dead, thump dead". A union may have saved you from that destiny and you don't even know it.