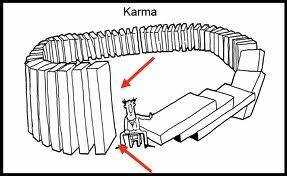 Demonstration of Cause and Effect

Do you play Dominoes? If you don't, I think you're missing out on a lot of fun. Those little rectangular blocks, called tiles actually, have as many as 12 dots painted on one side and can get to be pretty addictive to some folks.

You may have heard of "Domino Theory". The term has its roots in the 1950's and 60's in relation to Communist aggression in Asia. From Wikipedia...

We're witnessing some incredible violent actions around the world and intense political debates in our our own nation. These events make me ponder what's next and if perhaps there really is a "Domino Theory"? No matter what, when it comes to dominoes, one thing leads to another. Cause and effect.

So what brings the above to mind is really dominoes. I wanted to share the following video, write something to go with it, and this is the result. The cause was that I searched for the term "domino theory" to perhaps add some interest to the story, and the effect was that I got sidetracked.

Now lets get back to the original topic... dominoes

In my previous life as a phone system installer, I was assigned numerous jobs that included installing phones in newly constructed buildings. In Colorado Territory, a new shopping mall was scheduled to open on Saturday, and I was there trying to finish the last few loose communication ends for the malls phone system before the noon extravaganza opening ceremony.

Part of the festivities included a giant domino drop and it really was quite amazing. I'd been watching the team of people setting up the display for quite some time when I was assigned work at the mall, but the patience it took for them to place the hundreds of thousands of tiles needed for the display had to be seen to be appreciated.

Shortly before noon, the announcement was made that the doors were about to open. People were directed where to go to watch the dominoes and it went off without a hitch. The guy that got to start the show sure had a grin on his face as he pushed that first domino over in front of the crowd...

I believe I was the last person to walk by the display before the doors opened, and I could have been the guy that launched it as nobody could have stopped me had I wanted to. It likely would have landed me on the Denver Post's front page, on TV, in front of a judge, and ultimately behind bars, and though the little devil was whispering in my ear "go ahead, push that domino!", you know the little angel screaming in my other ear "don't do it!" easily won that argument.

Well, that was way back when in the early days of domino dropping. Now-a-days, the displays are a bit more creative and without further adieu, I offer the following...