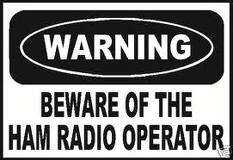 Imagine if you will, being the person in the US Patent Office when the patent application came in for the first telegraph, light bulb, telephone, or radio. If you had never heard of such a thing, seen one, or even had an idea that such a thing was possible, and two applications came in the same day for the same device with different descriptions, how would you decide who had the idea first? Well the telephone patent given to Al Bell required Bell beat a fellow named Elisha Gray in court to secure the patent, and some other "high tech" inventions have had similar discovery issues.

The guy most often given the credit for radios invention is a fellow named Guglielmo Marconi. What I find interesting in this story is the number of people involved that got no or little credit, and to make matters more interesting, the simple invention of the radio didn't make it practical... that happened years later.

We could start our radio story with the guy that discovered that a compass needle would move when placed near a wire... Hans Oersted discovered electromagnetism which is the foundation of all radio waves.

How about the first wirless telegraph... would that count as radio? If so then a guy named Joseph Henry should get the credit. Henry was the first guy known to have sent signals by induction... through thin air if you will.

The very first voice radio transmission happend on December 24, 1906, and it totally SHOCKED the folks listening! It seems that a young inventor named Reginald Fessenden became the first radio announcer that Christmas eve. From one account... "He began by transmitting "CQ CQ CQ..." in Morse to get the attention of nearby ships at sea. Then he picked up his microphone and spoke, undoubtedly astonishing all those lads floating around out there with their headphones on! Into their ears came a full range of sound instead of raspy CW notes. Fessenden became the world's first disc jockey as he queued up an Edison wax-cylinder recording of Handel and transmitted it."

Did you notice I havn't mentioned the name Marconi yet? He IS the guy that is usually given credit for the invention of the radio, but it seems he really had a rather minor role while Alexander Tesla should probably be more in line as determined in 1943 by the US Supreme Court.

You can read an interesting history of the radio at... http://www.ccrane.com/library/who-invented-radio.aspx

What brings the above to mind is the fact that I had my first QSO (radio contact) with another amateur radio station in 41 years yesterday. Though I've had hundreds, if not thousands of QSO's way back when, doing it again was just like the first time. I was excited, nervous, and my Morse code was awful.

Still, if you want to do something, you have to do it for the first time.