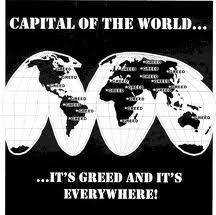 First off, if you are an employee and not a stock holder of Duckwall's/ALCO INC., I apologize for bad mouthing your employer, but beyond that... I think Duckwall's/ALCO is nothing more than another GREEDY corporation whose sole purpose is to make money and the only public relations they REALLY care about is the bottom line for their investors.

Well... what do I expect? I WISH corporations were good citizens and cared about their country, cities, and towns as much as they cared about the bottom line. We of course hear of the big corporate profit take every year... corporations are on track this year for great profits during a pitiful economy. How do you suppose they do that? Duckwall's/ALCO is a good example of boosting the bottom line while helping fuel a bad economy.

The CEO of the above mentioned crappy citizen corporation stated that the Duckwall's wasn't making enough (wasn't losing mind you) money to keep Duckwall's 200 some stores open. The company however did thank it's loyal Duckwall's customers for their past business, basically saying we don't care how much we impact your town or our employees, but we want you to drive to the nearest ALCO because we love you still... HA!

What did that do for Cambridge? Well, the town is in an uproar trying to figure out a way to get a community backed variety store to replace the departing Duckwall's. There is a city owned building that is owed rent by ALCO through 2012, but I think the town may have jumped the gun and let them off the hook for that. There are 5 employees that are losing their job. There is over $26,000 annual sales tax revenue Cambridge looses unless a replacement source is found. And to top it off, we were told that the local store made 8% profit for Duckwall's/ALCO last year.

No more state income tax collected from these terminated folks until they find work, no federal tax either, and the real possibility that some assistance might become necessary... we taxpayers get to pay again for the assistance and wonder if more city cuts might be necessary due to loss of revenue leading to more cuts...

We have become so profit oriented in this country that the bottom line is more important than common good and it effects so many adversely. Duckwall's/ALCO is one of the best examples of a corporation putting profit ahead of everything I can think of.

Here are a few examples beyond Duckwall's/ALCO...

The following statement is obviously true when you turn a corporation into an individual with no soul. It's also true for the rest of us...

Jesus said "No one can serve two masters. Either you will hate the one and love the other, or you will be devoted to the one and despise the other. You cannot serve both God and money."

More from this blogger · Brian Hoag
Comments
View 18 comments
Note: The nature of the Internet makes it impractical for our staff to review every comment. Please note that those who post comments on this website may do so using a screen name, which may or may not reflect a website user's actual name. Readers should be careful not to assign comments to real people who may have names similar to screen names. Refrain from obscenity in your comments, and to keep discussions civil, don't say anything in a way your grandmother would be ashamed to read.
Respond to this blog