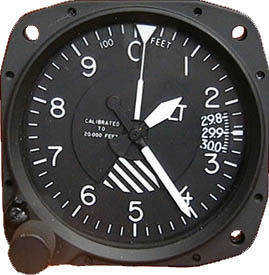 Blackie (our Jeep) has an old aircraft altimeter mounted under the dash. We got it years ago from an aircraft "junk" yard, and have gotten a lot of enjoyment watching the dials go around and around on trips into the Colorado high country.

If you are familiar with an altimeter, you know that weather changes effect the altitude displayed. For example, a low pressure area moving through the area will cause an altimeter to display a higher altitude than what it actually is, and modern altimeters that use barometric pressure to determine the elevation have adjustment knobs to allow for changes in weather. Elevation can change hundreds of feet from a weather system going through you see.

For an aircraft pilot, knowing accurately just how far off the ground you are can be pretty important now and then. As a matter of fact, every airport in the world has it's elevation posted for reference so a pilot can set his altimeter too. So today for some reason, I decided that now that I have an actual garage to park the Jeep in, I should know the elevation and can post it so I can set my altimeter when I want to go for a drive... kind of a check the oil and kick the tires sort of thing and a joke for the occasional pilot that stops by.

A Google search for the elevation of Cambridge came up with the following results on the first results page alone...

2414 - Official FAA elevation at the airport

Now if I was Santa Claus, which one of these altitudes should I use? Well, I'd sure HOPE the FAA has it right, and to be sure, the airport sits on a hill above town so it might just be right. In the real world being a few feet lower than expected might have some unintended consequences. Around my place, it could mean the difference of making down the chimney and ending up in the hay mow.

I've got one of those new fangled GPS units, but it takes it so long to determine the actual altitude that it isn't practical for motorized use, and I don't really trust it as from one day to next the reading changes by as much as 50 feet.

What brings the above to mind is that depending on what you are doing, getting accurate information is a life and death matter.

This Christmas might be a good time to get accurate information about the reason for the season, and I know of no better source than the Bible. There are differing accounts in the Bible, but here is what a guy named Luke had to say about it...

1Now in those days a decree went out from Caesar Augustus, that a census be taken of all the inhabited earth.

2This was the first census taken while Quirinius was governor of Syria.

3And everyone was on his way to register for the census, each to his own city.

4Joseph also went up from Galilee, from the city of Nazareth, to Judea, to the city of David which is called Bethlehem, because he was of the house and family of David,

5in order to register along with Mary, who was engaged to him, and was with child.

6While they were there, the days were completed for her to give birth.

7And she gave birth to her firstborn son; and she wrapped Him in cloths, and laid Him in a manger, because there was no room for them in the inn.

8In the same region there were some shepherds staying out in the fields and keeping watch over their flock by night.

9And an angel of the Lord suddenly stood before them, and the glory of the Lord shone around them; and they were terribly frightened.

10But the angel said to them, "Do not be afraid; for behold, I bring you good news of great joy which will be for all the people;

11for today in the city of David there has been born for you a Savior, who is Christ the Lord.

12"This will be a sign for you: you will find a baby wrapped in cloths and lying in a manger."

13And suddenly there appeared with the angel a multitude of the heavenly host praising God and saying,

14"Glory to God in the highest,

And on earth peace among men with whom He is pleased."

15When the angels had gone away from them into heaven, the shepherds began saying to one another, "Let us go straight to Bethlehem then, and see this thing that has happened which the Lord has made known to us."

16So they came in a hurry and found their way to Mary and Joseph, and the baby as He lay in the manger.

17When they had seen this, they made known the statement which had been told them about this Child.

18And all who heard it wondered at the things which were told them by the shepherds.

19But Mary treasured all these things, pondering them in her heart.

20The shepherds went back, glorifying and praising God for all that they had heard and seen, just as had been told them.

To each and every one of you I wish a blessed Christmas.