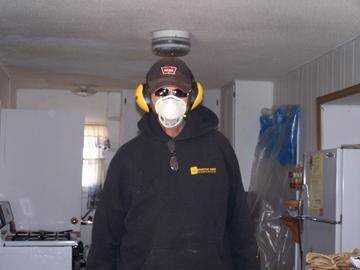 The City Slicker Ready For Action

Today marks two years as Nebraska residents for Margie and me. Time sure flies by when you're having fun! Now I have to wonder now and then just how much fun it has been...

When we bought the place, it needed some TLC as some of you may recall. The farmstead had been allowed to "return to nature" if you know what I mean, and we wound up in an epic battle for supremacy against the dreaded enemy... weeds.

I've learned weeds are like terrorists... they never stop their attacks, and we must do whatever we can to destroy the enemy at every opportunity! So far the score is 3-2 with the weeds in the lead. However, a new primary weapon has been procured and we'll see just how well those evil devils handle the mighty SKAG come this spring!

When we bought the farm, it was with the intention of turning it into our "dream" retirement home. Now we're not into fancy much as most folks that have got to know us will attest, but the old farm house while solidly built we feel, was in need of upgrades by our city slicker standards. So the impending "dream" has been quite the nightmare now and then. For one thing, that dreaded Murphy guy keeps sticking his nose into just about every project around the farm hampering progress at every turn.

Bug of the week - I could almost write an entire blog about the various insects that we encounter here. If there is anything other than the weeds that I underestimated about living here in the country, it's the bugs. However... I do seem to be making some progress along that front. As I upgrade the house I also seem to be tightening things up some to the point that the insect invasion seems to be getting better. I hope it's just not them waiting for reinforcements.

I've learned quite a bit about farming that I had virtually no knowledge of until we met some real farmers, and I lost my virginity to a John Deere as well... my first tractor ride that is. Since that innocent ride that included an entertaining dance sequence you can read about here, I've been in operating combines, and helped with corn harvest by actually driving a tractor while a combine emptied its loads into the grain cart I was towing. Low level precision farming operations from the city slicker... who would have thought!

We've met some the nicest folks we could ever imagine. I can still hardly believe that we know some folks that live in surrounding towns now. When we lived in the city, we barely knew any of our neighbors. And speaking of neighbors, we've met all the folks that live on our road, had dinner with most of 'em, and Margie and I are grateful for all the assistance and friendship they have shown us. Nebraska folks are the best!

I started writing this blog as a sort of journal of Margie and my transformation from city slickers to country folk. I suppose that we'll always be city slickers to some, but I sure don't feel like one any more. Going forward, I'll try and write about some things I find interesting that I hope you will too, as well as relate some of my more interesting experiences around the farm and southwestern Nebraska.

In the mean time, have a great weekend!