Working Girls and the Ring Of Death 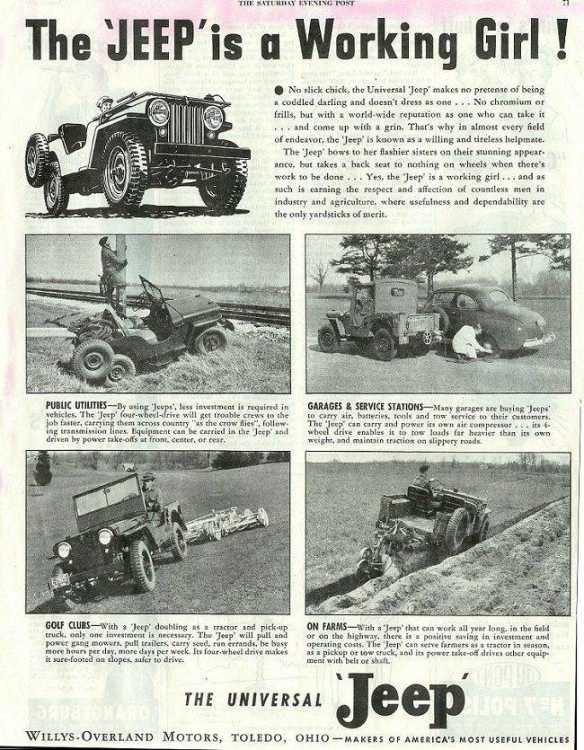 The Sun Never Sets On The Mighty Jeep

The Saturday Evening Post ad reads... "No slick chick, the Universal "Jeep" makes no pretense of being a coddled darling, and doesn't dress like one... No chromium or frills, but with a world-wide reputation as one who can take it... and come up with a grin." http://www.thecj2apage.com/images/jun_1947_cj2a_ad_2.jpg

Those of you that know me know I'm a Jeep guy. Yep, the greatest name in 4 wheel drive is in my blood, and I can thank my Mom's cousin for my gritty transfusion and learning that the best things in life are dirty. You see, my first experience with a Jeep was in a farm field SW of Ewing, Nebraska in a FC-150. It didn't exactly look like the Jeeps most of us expect to see, but it went everywhere on the farm and did everything it seemed, and I was transfused. Here is some info on the Jeep FC 150 and 170... http://www.offroaders.com/tech/jeep/Jeep-Forward-Control.htm

It's almost Veterans Day, and though we usually remember the men and women that fought for our freedoms, this year I want to take a moment and honor another American veteran... the beloved Jeep.

Many years after my first Jeep ride and owning several, I ran across an old Willys ad from WWII. It's before my time, but I'm sure there are a few of you folks that recall the Saturday Evening Post full page advertisements during the war. So today from WWII, I'd like to share. Read how the "working girls" saved the goose! 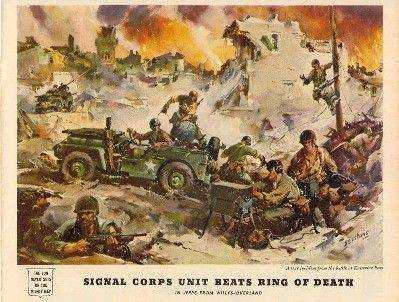 First Lt..., US Army Signal Corps as a result of the following exploit during the victorious drive on Bizerte, was "awarded the Silver Star for gallantry in action, outstanding leadership, courage and initiative." His reports states:

"Our post was right up there in the front line--- and our job was to keep communications open between staff headquarters and the units in action. We were damned short of transportation vehicles, but with three tough little Jeeps and a couple of trucks, we had had fought our way up front to S-- through an inky blackout and a mass of traffic the night before Tuesday.

At about 1900 hours (7PM) on Wednesday night, a heavy artillery duel could be plainly heard from our message center. Bombing and strafing were continuous. Our wire layers and repair crews were under enemy fire all the time - but we kept the lines open.

Then reports coming through showed things weren't going so good out there. It looked like our little town of S-- might be in encircled, and us with it, at any moment.

At about 2100 (9PM) some French soldiers came to us for hand grenades to blow up the civilian switchboard they had been operating and to go out with us when we left.

But our corps signal officer told them to put the switchboard out on the sidewalk and that we would pick it up when and if we left.

Things got worse out there so I sent most of our wire crews and messengers back. Just enough of us stayed on to keep the message center going.

We had just started to cut our circuit when an ammunition dump about 100 yards from us blew up with a loud roar, showering us with sparks and shrapnel. We thought we had caught a direct bomb hit. But when we found out what it really was, we kept right on working.

Finally at about 0300 (3AM), we completed our cutover and were loaded to pull out. We gave our over-burdened Jeeps the gun and they got going. As we left, the whole sky was aflame, and the ammunition dump continued to explode. We were so nearly surrounded that we could hear the machine gun fire only a few hundred yards away.

It was up to the Jeeps to take us through the only gap left in that ring of death. As we came up to the French telephone company building, we saw the switchboard on the sidewalk. We loaded it on the hood of my Jeep and with this added burden, we beat it out of there through a veritable inferno.

It was nip and tuck all the way, and if our Jeeps had failed us, even for a moment, our goose would have been cooked. But they didn't fail, and we arrived at headquarters, back of the lines, about 0445 (4:45AM) with all of our equipment and personnel and only minor casualties."

It is our great priviledge in this war to supply the Willys-built Jeeps that are today serving thousands of brave American and other United Nation fighting men on every battlefront in the world, and in every forward moving invasion. Willys-Overland Inc.

The fighting heart of every Jeep in the world -- and the source of its amazing power, speed, flexibility, dependability, and fuel economy -- is the Jeep "Go-Devil" Engine, which was designed and perfected by Willys-Overland P.S. My Dad died on Veterans Day 5 years ago. I miss you Dad.