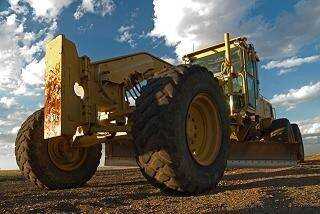 We're just three months short of living in Nebraska 3 years now, and it's just about everything we thought it would be and more. Since we live in the country outside Cambridge, we live on a gravel road, and for those of you that live on gravel roads, you already know about it. The "it" is that the maintainer has a better fix on the weather than the trained weather people do.

I think weather forecasters have a great job. They can be wrong all the time and continue to guess the weather for us and we don't seem to mind them being wrong. I mean really... what are we to do anyway? What is interesting though is that everybody in this little corner of Furnas county at least knows that the weather is controlled by the road maintainer.

I wouldn't have thought about it much except it happens every time! Our road starts getting in really poor condition, the maintainer shows up, and two days later it rains. You might think this is poppycock, but ask any of my neighbors and I think they would say the same thing... "the maintainer went by, two days till rain".

The end result, we always have a really good road for two days at best. I'm worried this time though, with the maintainer came the ditch mower... this may be a bigger event that I know how to deal with, or the mower may cancel the maintainer??? Oh my, maybe I better consult the folks that always seem to know the short term forecast, my farming neighbors. Since a new wrinkle has been introduced into the forecast model I've not witnessed before, I'd hate to think we're in for rain when it might snow or nothing.