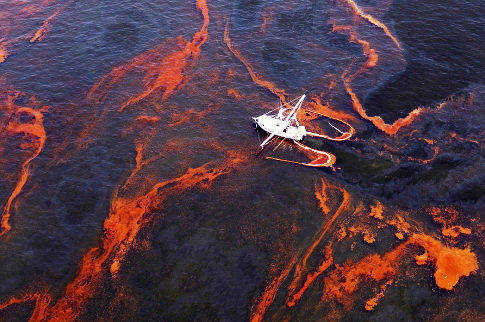 I've spent way too much time reading about the developing environmental disaster in the Gulf on the Internet. Conspiracy, greed, lies, deceit, cover-up... the list goes on and on as to what happened and what might happen going forward. Here is just a sampling of interesting stuff I've found so far...

There is the story about a North Korean diesel submarine that, after sneaking out of Cuba, performed a suicide attack on the Deep Water Horizon rig. You can read about it at... http://www.eutimes.net/2010/05/us-orders-blackout-over-north-korean-torpedoing-o...

How about mass evacuations being planned? This one is kinda interesting with "visual evidence"... http://www.liveleak.com/view?i=756_1275016676

How about the story that there has been an underground blowout, a somewhat common occurance in the drilling industry as it turns out, but the locations and the ramifications of this particular well may make matters much worse... http://clipmarks.com/clipmark/9803698D-1C13-458F-8B5E-1ECBFFAFD0A4/

Speaking of "much worse"... http://www.politicolnews.com/toxic-oil-spill-rain-will-destroy-north-america/

The Nalco dispersant that BP is using (BTW - It's reported that BP has financial interests in Nalco) is much more toxic than reported and is not the best choice... http://www.protecttheocean.com/gulf-oil-spill-bp/

We've heard in the news that workers trying to clean up and stop the leak have had some health issues requiring resperators. Here is some info on volatile organic compounds, benzine, and hydrogen sulfide in the Gulf... http://www.abovetopsecret.com/forum/thread582193/pg1

The US government is planning new legislation establishing a gigantic public works project financed by BP for the cleanup... http://evans-politics.com/source-huge-federal-gulf-public-works-project-coming.h...

All this stuff sounds pretty scary to me. The book of Revelation in the Bible states... "The second angel sounded his trumpet, and something like a huge mountain, all ablaze, was thrown into the sea. A third of the sea turned into blood,... http://www.biblegateway.com/passage/?search=revelation%208.8&version=NIV

Some folks could sure look at that Bible verse and see the fire and sinking of the Deep Water Horizon drill rig as "something like a huge mountain burning with fire that was cast into the sea", and to be sure, the pictures of that red crude doesn't exactly make me think it isn't bloody looking.

Is it the end? Maybe, maybe not. The following link will take you to a document that is certainly controversial, and the author makes strong statements about the validity of his information. Considering the authors stated purpose, I only ask that you review it for yourself... http://www.the-end.com/2008GodsFinalWitness/2008_Gods_Final_Witness.pdf