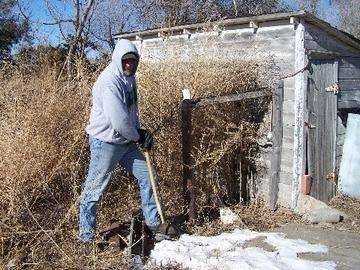 Spring is here, and so is the enemy. The winter truce is over and Leafy Spurge, Bindweed, and closely allied Pigweed have combined to attack from all directions. Yep, it's that time of year again and the Grim Weeder is starting to fight back with a combined armored and chemical defense, followed up with hand to hand, er, hand to root combat.

Long time followers of The City Slickers know of what I speak already. These Nebraska country weeds are tough. I've quickly discovered that fighting weeds here is nothing like the fight I had in Colorado Territory, and the realization that staying ahead of them around the farm(stead) will be a yearly summer battle requiring extensive planning and resources has finally sunk in.

In my past life as a city dweller, taking care of the yard was fairly easy. A little fertilizer, a little water, a little Weed-B-Gone, a sharp mower blade and your were good to go for the most part. Here in Nebraska, I'm finding that it takes no fertilizer, no water, and a lot of Weed-B-Gone. I'm about to put on my third set of mower blades after one mowing season from hitting old buried junk that is working it's way out of the ground in support of the weeds. The old junk seems to appear overnight over a wide area turning the battle zone into a mine field of metal fragments for the mechanized assault vehicle (lawn mower).

My weed war is just getting underway for this season. We've only been here a couple seasons now, and we're just starting to get a handle on what it takes to fight successfully. I've learned weeds are smart asses too because the they shout mockingly... "Look at me FARMER Brian, YOU MISSED ME!!! HAHAHA!!!" Even they obviously know I'm no farmer. They also know they have Crabgrass just waiting to counterattack when I least expect it.