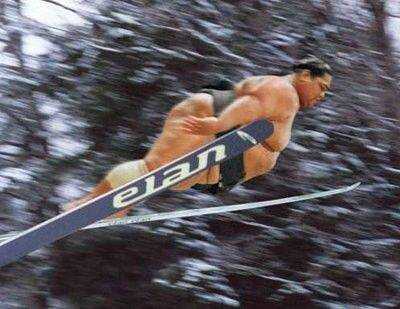 The Darwin Awards salute the improvement of the human genome by honoring those who accidentally remove themselves from it according to the organizations web site http://www.darwinawards.com/

Most of us have at least heard of the Darwin Awards, and some of the ways people have done themselves in accidentally are certainly entertaining when viewed from an outsiders perspective.

The Darwin Award I recall was given to a man that started trying to commit suicide with poison, a gun, and a jump off a cliff, but the sequence of events ended him in the hospital where he died.

To make his story short... he jumped, he missed, and the cold water at the base of the cliff cushioned his fall and caused him to expell the poison. His plan failed, but the cold water did the job for him as cause of death was hypothermia.

What brings this to mind was last nights Olympic ski jumping competition. I gotta think that the first ski jumpers were actually Darwin Award competitors.

Think about it... who in their right mind would strap two boards on their feet and then head off a cliff at the fastest speed possible trying to see who can overcome gravity the longest? The fact that they still do it as an organized sporting event just screams of Advanced Darwinism to me somehow...