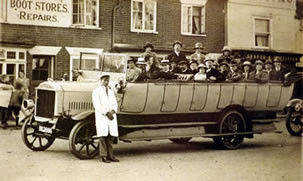 Most of us have heard someone use a phrase like "the whole shebang" and we know the person is referring to the whole thing or all of something... whatever the something actually is. But did you ever stop to wonder how the phrase came to mean all of it, or the whole thing?

According to a website all about phrases, there is quite the history behind "the whole shebang". For instance, what is a shebang? As far as I can tell, the earliest known use of shebang was in a poem written in 1862 by Walt Whitman, and it made reference to a shelter or dwelling perhaps.

Mark Twain made reference to a shebang in 1872 in reference to a car, but the first actual use of the whole shebang with its current meaning apparently appeared, also in 1872, in the Sedalia Daily Democrat. You can read about the history of the term at... http://www.phrases.org.uk/meanings/the-whole-shebang.html

What brings this to mind was my recent trip to Omaha. Omaha has sure grown since I was a kid there. During my trip I drove past the homes I grew up in, and down streets that I was familiar with from back in the day. I was just 15 when we left Omaha and moved to Colorado territory, but many of the streets have not changed much and I had a pretty easy time getting around the old neighborhoods.

Now unless you have driven in Omaha on the main and side streets lately, you likely are not familiar with the potholes in Omaha streets. I admit its been a harsh winter in Omaha, and there is a couple feet of snow on the ground contributing to the problem, but I gotta tell ya... they are everywhere, and many of the potholes are big enough to swallow a bicycle. Okay, so maybe not quite that big, but BIG!

After a few miles of city street driving, I think the phrase should have the following added to its history as it could have been used in Omaha when a driver warns his passengers... "Hole!"... then you hear "ShBANG!! as the car nearly falls apart after hitting a 10" deep pothole at 35 MPH. I bet the alignment shops love the weather on the eastern shore of Nebraska.